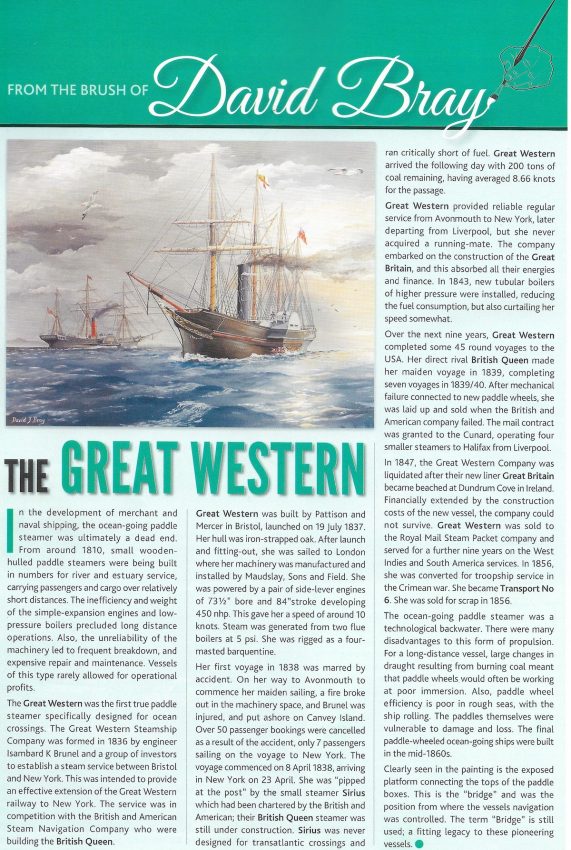 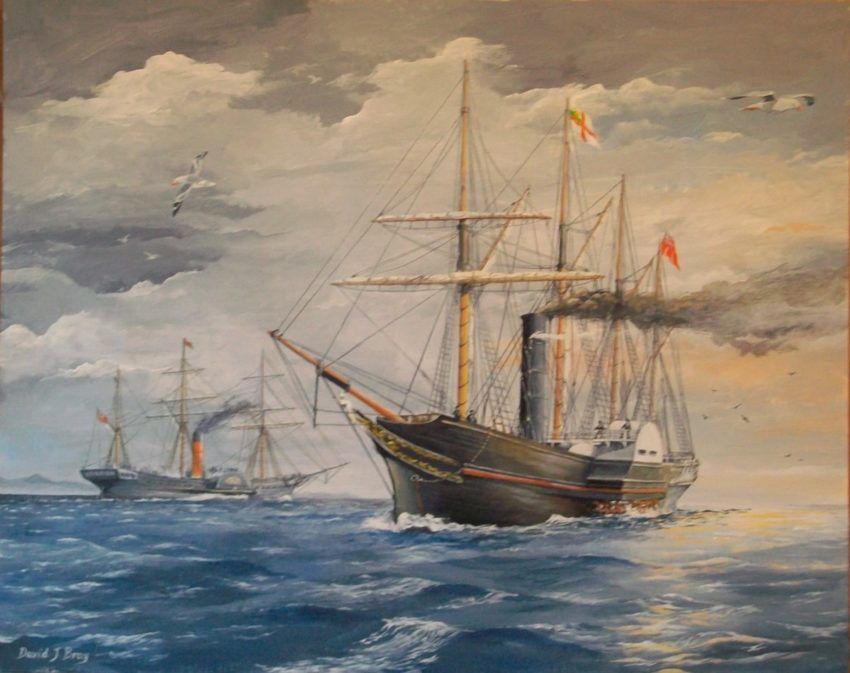 In the development of merchant and naval shipping, the ocean-going paddle steamer was ultimately a dead end. From around 1810, small wooden-hulled paddle steamers were being built in numbers for river and estuary service, carrying passengers and cargo over relatively short distances. The inefficiency and weight of the simple-expansion engines and low-pressure boilers precluded long distance operations. Also, the unreliability of the machinery led to frequent breakdown, and expensive repair and maintenance. Vessels of this type rarely allowed for operational profits.

The “Great Western” was the first true paddle steamer specifically designed for ocean crossings. The Great Western Steamship Company was formed in 1836 by engineer Isambard K Brunel and a group of investors to establish a steam service between Bristol and New York. This was intended to provide an effective extension of the Great Western railway to New York. The service was in competition with the British and American Steam Navigation Company who were building the “British Queen”.

“Great Western” was built by Pattison and Mercer in Bristol, launched on 19th July 1837. Her hull was iron-strapped oak. After launch and fitting-out, she was sailed to London where her machinery was manufactured and installed by Maudslay, Sons and Field. She was powered by a pair of side-lever engines of 73½” bore and 84”stroke developing 450 n.h.p. This gave her a speed of around 10 knots. Steam was generated from two flue boilers at 5 p.s.i. She was rigged as a four-masted barquentine.

Her first voyage in 1838 was marred by accident. On her way to Avonmouth to commence her maiden sailing, a fire broke out in the machinery space, and Brunel was injured, and put ashore on Canvey Island. Over 50 passenger bookings were cancelled as a result of the accident, only 7 passengers sailing on the voyage to New York. The voyage commenced on 8th April 1838, arriving in New York on 23rd April. She was “pipped at the post” by the small steamer “Sirius” which had been chartered by the British and American; their “British Queen” steamer was still under construction. “Sirius” was never designed for transatlantic crossings, and ran critically short of fuel. “Great Western” arrived the following day with 200 tons of coal remaining, having averaged 8.66 knots for the passage.

“Great Western” provided reliable regular service from Avonmouth to New York, later departing from Liverpool, but she never acquired a running-mate. The company embarked on the construction of the “Great Britain”, and this absorbed all their energies and finance. In 1843 new tubular boilers of higher pressure were installed, reducing the fuel consumption, but also curtailing her speed somewhat.

Over the next nine years, “Great Western” completed some 45 round voyages to the USA. Her direct rival “British Queen” made her maiden voyage in 1839, completing seven voyages in 1839/40. After mechanical failure connected to new paddle wheels, she was laid up and sold when the British and American company failed. The mail contract was granted to the Cunard, operating four smaller steamers to Halifax from Liverpool.

In 1847, the Great Western company was liquidated after their new liner “Great Britain” became beached at Dundrum Cove in Ireland. Financially extended by the construction costs of the new vessel, the company could not survive. “Great Western” was sold to the Royal Mail Steam Packet company, and served for a further nine years on the West Indies and South America services. In 1856 she was converted for troopship service in the Crimean war. She became “Transport No 6”. She was sold for scrap in 1856.

The ocean-going paddle steamer was a technological backwater. There were many disadvantages to this form of propulsion. For a long-distance vessel, large changes in draught resulting from burning coal meant that paddle wheels would often be working at poor immersion. Also, paddle wheel efficiency is poor in rough seas, with the ship rolling. The paddles themselves were vulnerable to damage and loss. The final paddle-wheeled ocean-going ships were built in the mid-1860s.

Clearly seen in the painting is the exposed platform connecting the tops of the paddle boxes. This is the “bridge”, and was the position from where the vessels navigation was controlled. The term “Bridge” is still used; a fitting legacy to these pioneering vessels.