Born in the Norfolk town of Great Yarmouth, David Bray went to sea in 1965, joining Ellerman Lines as Deck Cadet. Gaining his Second Mate’s Certificate in 1969 he sailed in a variety of cargo and passenger vessels until 1972 when he joined the British Antarctic Survey, serving three years in the RRS “John Biscoe”.

Gaining his Masters’ (Foreign Going) Certificate in 1976, he sailed in Ro-Ro ferries, tankers and a variety of Offshore Support Vessels.

More recently he has lectured to ships’ Masters and Officers at the Maritime Studies department of Lowestoft College. He pioneered the training for a new, high-tech development, Dynamic Positioning (DP), in 1985, and won a National Training award for this work. Lowestoft rapidly became the world-leader in this technology.

He is the author of the Nautical Institute guidelines and rules for the conduct of DP training, and the Dynamic Positioning Operators Handbook. The latter is recognised as the standard text for the training of DPOs. Closer to home, he has run DP training at Lowestoft for 25 years and has trained over 4,000 ships’ Captains and Officers in that time. He has also trained the staff from most of the training centres worldwide. At other times he has lectured to candidates for Chief Officers’ and Master Mariners’ qualifications, on such subjects as ship stability, ship construction, navigation and marine engineering.

David has written and delivered technical papers at a number of conferences worldwide, and delivered the Nautical Institute Annual Address in 1999. He chaired the Marine Technology Society DP conference in Houston in 2000. He has also been instrumental in the development of training simulation programmes in association with manufacturing and training organisations in Norway. He has frequently lectured on DP in Norway and elsewhere. 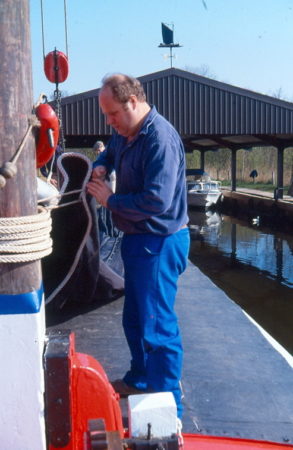 Now retired from nautical education, he is currently in demand as a cruiseship lecturer, his primary subject being maritime history. He has been engaged as guest speaker in a variety of cruiseships, including those of Cunard, P&O, Saga, Fred. Olsen cruises, and on board “Discovery”. His specialist areas include the 19th and 20th century history and development of merchant shipping, and the marine history of the two World Wars.

In the past, David has been involved in the preservation and management of historic ships, and still has a keen interest in these areas. He has sailed in a variety of historic sailing vessels, including the Norwegian square-rigger “Sørlandet”, the Lowestoft sailing trawler “Excelsior” and the Norfolk wherries “Maud” and “Albion”; the latter he served as Skipper for eighteen years.

More recently, David has revived an old interest in marine art, and is currently completing a number of commissions for clients.

In retirement, when not away in a cruise liner, he enjoys modelmaking, model engineering and painting.