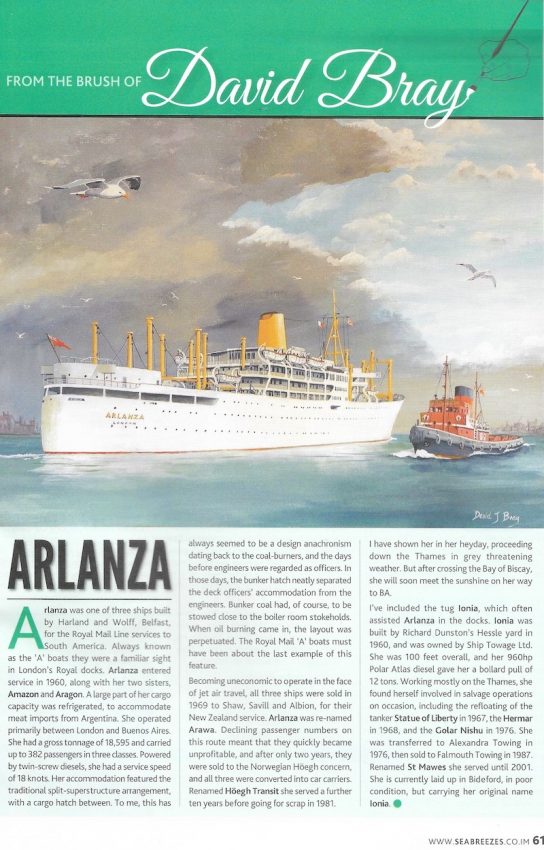 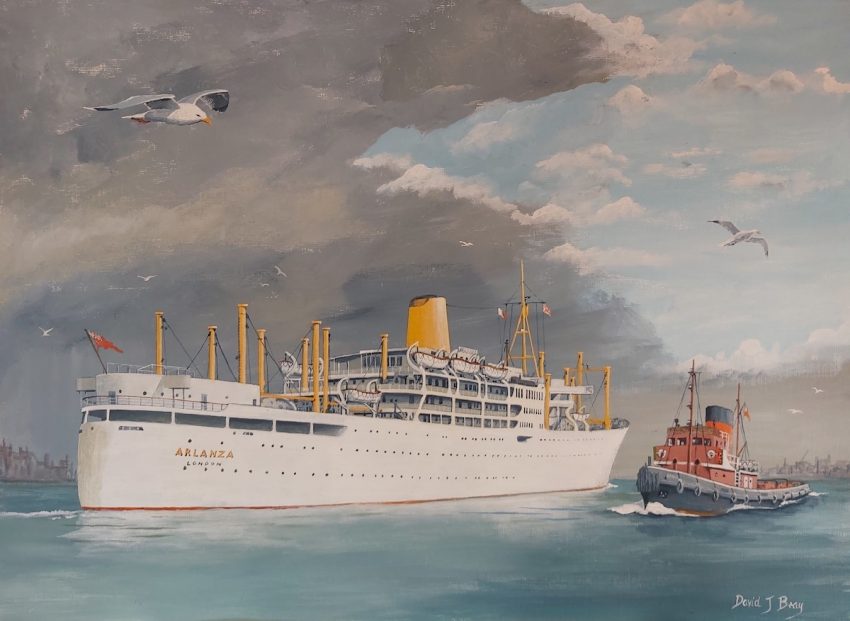 “Arlanza” was one of three ships built by Harland and Wolff, Belfast, for the Royal Mail Line services to South America. Always known as “the ‘A’ boats” they were a familiar sight in London’s Royal docks. “Arlanza” entered service in 1960, along with her two sisters, “Amazon” and “Aragon”. A large part of her cargo capacity was refrigerated, to accommodate meat imports from Argentina. She operated primarily between London and Buenos Ayres. She had a gross tonnage of 18,595, and carried up to 382 passengers in three classes.

Powered by twin-screw diesels, she had a service speed of 18 knots. Her accommodation featured the traditional split-superstructure arrangement, with a cargo hatch between. To me, this has always seemed to be a design anachronism dating back to the coal-burners, and the days before engineers were regarded as officers. In those days the bunker hatch neatly separated the deck officers’ accommodation from the engineers. Bunker coal had, of course, to be stowed close to the boiler room stokeholds. When oil burning came in, the layout was perpetuated. The Royal Mail “A” boats must have been about the last example of this feature.

Becoming uneconomic to operate in the face of jet air travel, all three ships were sold in 1969 to Shaw, Savill and Albion, for their New Zealand service. “Arlanza” was re-named “Arawa”. Declining passenger numbers on this route meant that they quickly became unprofitable, and after only two years they were sold to the Norwegian Höegh concern, and all three were converted into car carriers. Renamed “Höegh Transit” she served a further ten years before going for scrap in 1981.

I have shown her in her heyday, proceeding down the Thames in grey threatening weather. But after crossing the Bay of Biscay, she will soon meet the sunshine on her way to BA.

I’ve included the tug “Ionia”, which often assisted “Arlanza” in the docks. “Ionia” was built by Richard Dunston’s Hessle yard in 1960, and was owned by Ship Towage Ltd. She was 100 feet overall, and her 960hp Polar Atlas diesel gave her a bollard pull of 12 tons. Working mostly on the Thames, she found herself involved in salvage operations on occasion, including the refloating of the tanker “Statue of Liberty” in 1967, the “Hermar” in 1968, and the “Golar Nishu” in 1976. She was transferred to Alexandra Towing in 1976, then sold to Falmouth Towing in 1987. Renamed “St Mawes” she served until 2001. She is currently laid up in Bideford, in poor condition, but carrying her original name “Ionia”.