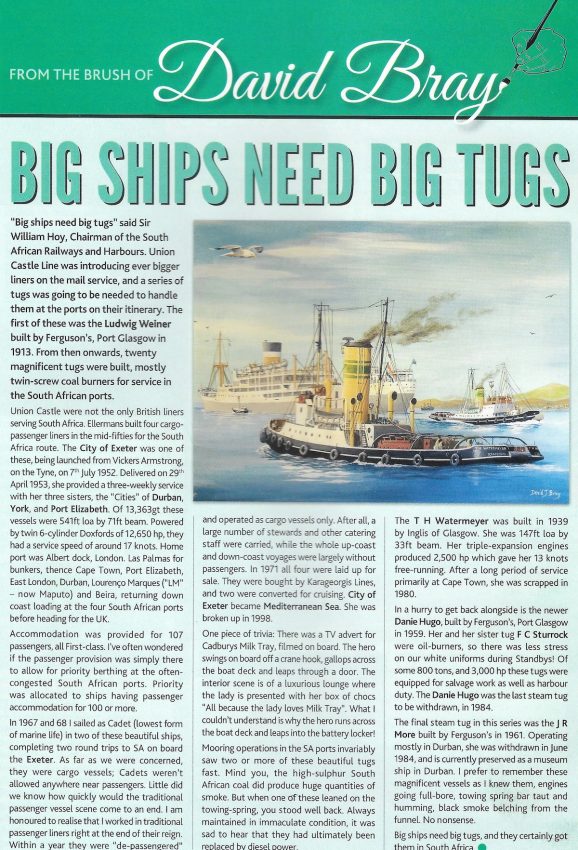 “Big ships need big tugs” said Sir William Hoy, Chairman of the South African Railways and Harbours. Union Castle Line was introducing ever bigger liners on the mail service, and a series of tugs was going to be needed to handle them at the ports on their itinerary. The first of these was the “Ludwig Weiner” built by Ferguson’s, Port Glasgow in 1913. From then onwards, twenty magnificent tugs were built, mostly twin-screw coal burners for service in the South African ports.

Union Castle were not the only British liners serving South Africa. Ellermans built four cargo-passenger liners in the mid-fifties for the South Africa route. The “City of Exeter” was one of these, being launched from Vickers Armstrong, on the Tyne, on 7th July 1952. Delivered on 29th April 1953, she provided a three-weekly service with her three sisters, the “Cities” of Durban, York, and Port Elizabeth. Of 13,363gt these vessels were 541ft l.o.a. by 71ft beam. Powered by twin 6-cylinder Doxfords of 12,650 hp, they had a service speed of around 17 knots. Home port was Albert dock, London. Las Palmas for bunkers, thence Cape Town, Port Elizabeth, East London, Durban, Lourenço Marques (“LM” – now Maputo) and Beira, returning down coast loading at the four South African ports before heading for the UK.

Accommodation was provided for 107 passengers, all First-class. I’ve often wondered if the passenger provision was simply there to allow for priority berthing at the often-congested South African ports. Priority was allocated to ships having passenger accommodation for 100 or more.

In 1967 and 68 I sailed as Cadet (lowest form of marine life) in two of these beautiful ships, completing two round trips to SA on board the “Exeter”. As far as we were concerned, they were cargo vessels; Cadets weren’t allowed anywhere near passengers. Little did we know how quickly would the traditional passenger vessel scene come to an end. I am honoured to realise that I worked in traditional passenger liners right at the end of their reign. Within a year they were “de-passengered” and operated as cargo vessels only. After all, a large number of stewards and other catering staff were carried, while the whole up-coast and down-coast voyages were largely without passengers. In 1971 all four were laid up for sale. They were bought by Karageorgis Lines, and two were converted for cruising. “City of Exeter” became “Mediterranean Sea”. She was broken up in 1998.

One piece of trivia: There was a TV advert for Cadburys Milk Tray, filmed on board. The hero swings on board off a crane hook, gallops across the boat deck and leaps through a door. The interior scene is of a luxurious lounge where the lady is presented with her box of chocs “All because the lady loves Milk Tray”. What I couldn’t understand is why the hero runs across the boat deck and leaps into the battery locker!

Mooring operations in the SA ports invariably saw two or more of these beautiful tugs fast. Mind you, the high-sulphur South African coal did produce huge quantities of smoke. But when one of these leaned on the towing-spring, you stood well back. Always maintained in immaculate condition, it was sad to hear that they had ultimately been replaced by diesel power.

The “T H Watermeyer” was built in 1939 by Inglis of Glasgow. She was 147 ft loa. By 33 ft beam. Her triple-expansion engines produced 2,500 hp which gave her 13 knots free-running. After a long period of service primarily at Cape Town, she was scrapped in 1980.

In a hurry to get back alongside is the newer “Danie Hugo”, built by Ferguson’s, Port Glasgow in 1959. Her and her sister tug “F C Sturrock” were oil-burners, so there was less stress on our white uniforms during Standbys! Of some 800 tons, and 3,000 hp these tugs were equipped for salvage work as well as harbour duty. The “Danie Hugo” was the last steam tug to be withdrawn, in 1984.

The final steam tug in this series was the “J R More” built by Ferguson’s in 1961. Operating mostly in Durban, she was withdrawn in June 1984, and is currently preserved as a museum ship in Durban. I prefer to remember these magnificent vessels as I knew them, engines going full-bore, towing spring bar taut and humming, black smoke belching from the funnel. No nonsense.

Big ships need big tugs, and they certainly got them in South Africa.