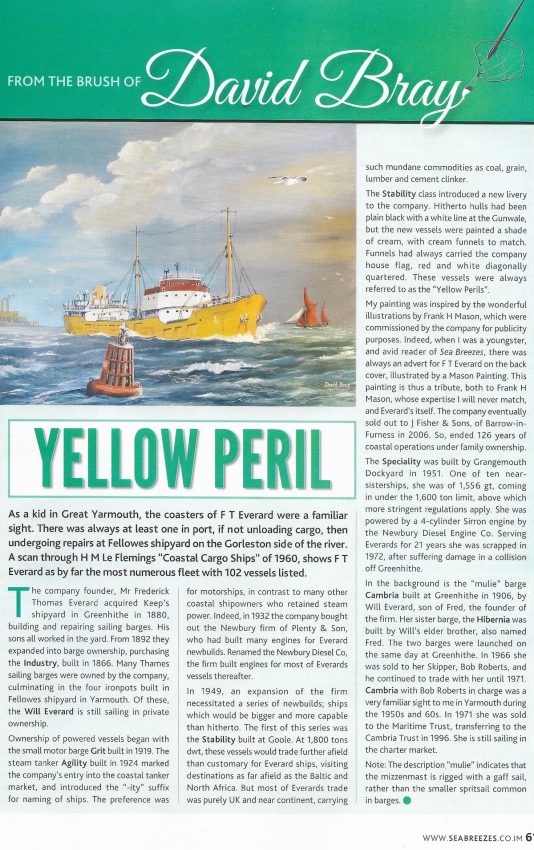 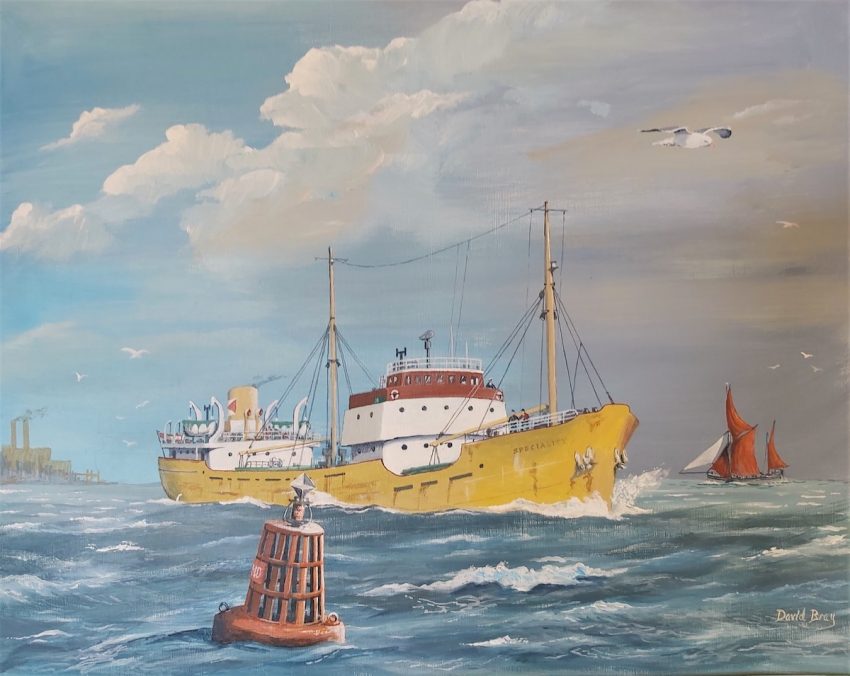 As a kid in Great Yarmouth, the coasters of F T Everard were a familiar sight. There was always at least one in port, if not unloading cargo, then undergoing repairs at Fellowes shipyard on the Gorleston side of the river. A scan through H M Le Flemings “Coastal Cargo Ships” of 1960 shows F T Everard as by far the most numerous fleet with 102 vessels listed.

The company founder, Mr Frederick Thomas Everard acquired Keep’s shipyard in Greenhithe in 1880, building and repairing sailing barges. His sons all worked in the yard. From 1892 they expanded into barge ownership, purchasing the “Industry”, built in 1866. Many Thames sailing barges were owned by the company, culminating in the four “ironpots” built in Fellowes shipyard in Yarmouth. Of these, the “Will Everard” is still sailing in private ownership.

Ownership of powered vessels began with the small motor barge “Grit” built in 1919. The steam tanker “Agility” built in 1924 marked the company’s entry into the coastal tanker market, and introduced the “-ity” suffix for naming of ships. The preference was for motorships, in contrast to many other coastal shipowners who retained steam power. Indeed, in 1932 the company bought out the Newbury firm of Plenty & Son, who had built many engines for Everard newbuilds. Renamed the Newbury Diesel Co., the firm built engines for most of Everards vessels thereafter.

In 1949, an expansion of the firm necessitated a series of newbuilds; ships which would be bigger and more capable than hitherto. The first of this series was the “Stability” built at Goole. At 1,800 tons dwt these vessels would trade further afield than customary for Everard ships, visiting destinations as far afield as the Baltic and North Africa. But most of Everards trade was purely UK and near continent, carrying such mundane commodities as coal, grain, lumber and cement clinker.

The “Stability” class introduced a new livery to the company. Hitherto hulls had been plain black with a white line at the Gunwale, but the new vessels were painted a shade of cream, with cream funnels to match. Funnels had always carried the company houseflag, red and white diagonally quartered. These vessels were always referred to as the “Yellow Perils”.

My painting was inspired by the wonderful illustrations by Frank H Mason, which were commissioned by the company for publicity purposes. Indeed, when I was a youngster, and avid reader of Sea Breezes, there was always an advert for F T Everard on the back cover, illustrated by a Mason Painting. This painting is thus a tribute, both to Frank H Mason, whose expertise I will never  match, and Everard’s itself. The company eventually sold out to J Fisher & Sons, of Barrow-in-Furness in 2006. So ended 126 years of coastal operations under family ownership.

The “Speciality” was built by Grangemouth Dockyard in 1951. One of ten near-sisterships, she was of 1,556 gt, coming in under the 1600 ton limit, above which more stringent regulations apply. She was powered by a 4-cylinder “Sirron” engine by the Newbury Diesel Engine Co. Serving Everards for 21 years she was scrapped in 1972 after suffering damage in a collision off Greenhithe.

In the background is the “mulie” barge “Cambria” built at Greenhithe in 1906 by Will Everard, son of Fred, the founder of the firm. Her sister barge, the “Hibernia” was built by Will’s elder brother, also named Fred. The two barges were launched on the same day at Greenhithe. In 1966 she was sold to her Skipper, Bob Roberts, and he continued to trade with her until 1971. “Cambria” with Bob Roberts in charge was a very familiar sight to me in Yarmouth during the 1950s and 60s. In 1971 she was sold to the Maritime Trust, transferring to the Cambria Trust in 1996. She is still sailing in the charter market.

Note: The description “mulie” indicates that the mizzenmast is rigged with a gaff sail, rather than the smaller spritsail common in barges.