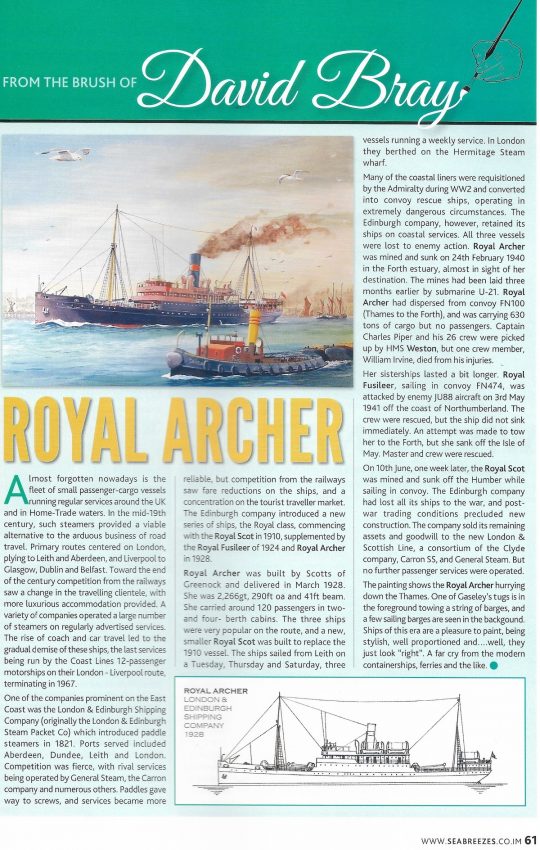 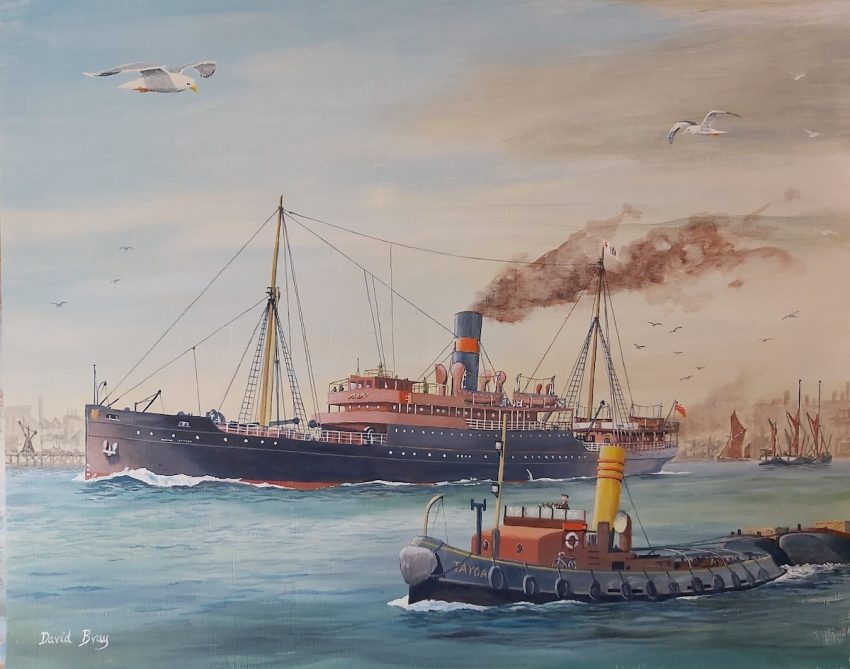 Almost forgotten nowadays is the fleet of small passenger-cargo vessels running regular services around the UK and in Home-Trade waters. In the mid-19th century, such steamers provided a viable alternative to the arduous business of road travel. Primary routes centered on London, plying to Leith and Aberdeen, and Liverpool to Glasgow, Dublin and Belfast. Toward the end of the century competition from the railways saw a change in the travelling clientele, with more luxurious accommodation provided. A variety of companies operated a large number of steamers on regularly advertised services. The rise of coach and car travel led to the gradual demise of these ships, the last services being run by the Coast Lines 12-passenger motorships on their London – Liverpool route, terminating in 1967.

One of the companies prominent on the East Coast was the London & Edinburgh Shipping Company (originally the London & Edinburgh Steam Packet Co.) which introduced paddle steamers in 1821. Ports served included Aberdeen, Dundee, Leith and London. Competition was fierce, with rival services being operated by General Steam, the Carron company and numerous others. Paddles gave way to screws, and services became more reliable, but competition from the railways saw fare reductions on the ships, and a concentration on the tourist traveller market. The Edinburgh company introduced a new series of ships, the Royal class, commencing with the “Royal Scot” in 1910, supplemented by the “Royal Fusileer” of 1924 and “Royal Archer” in 1928.

“Royal Archer” was built by Scotts of Greenock and delivered in March 1928. She was 2,266gt, 290ft oa and 41ft beam. She carried around 120 passengers in two- and four- berth cabins. The three ships were very popular on the route, and a new, smaller “Royal Scot” was built to replace the 1910 vessel. The ships sailed from Leith on a Tuesday, Thursday and Saturday, three vessels running a weekly service. In London they berthed on the Hermitage Steam wharf.

Many of the coastal liners were requisitioned by the Admiralty during WW2 and converted into convoy rescue ships, operating in extremely dangerous circumstances. The Edinburgh company, however, retained its ships on coastal services. All three vessels were lost to enemy action. “Royal Archer” was mined and sunk on 24th February 1940 in the Forth estuary, almost in sight of her destination. The mines had been laid three months earlier by submarine U-21. “Royal Archer” had dispersed from convoy FN100 (Thames to the Forth), and was carrying 630 tons of cargo but no passengers. Captain Charles Piper and his 26 crew were picked up by HMS Weston, but one crew member, William Irvine, died from his injuries.

Her sisterships lasted a bit longer. “Royal Fusileer”, sailing in convoy FN474, was attacked by enemy JU88 aircraft on 3rd May 1941 off the coast of Northumberland. The crew were rescued, but the ship did not sink immediately. An attempt was made to tow her to the Forth, but she sank off the Isle of May. Master and crew were rescued.

On 10th June, one week later, the “Royal Scot” was mined and sunk off the Humber while sailing in convoy. The Edinburgh company had lost all its ships to the war, and post-war trading conditions precluded new construction. The company sold its remaining assets and goodwill to the new London & Scottish Line, a consortium of the Clyde company, Carron SS, and General Steam. But no further passenger services were operated.

The painting shows the “Royal Archer” hurrying down the Thames. One of Gaseley’s tugs is in the foreground towing a string of barges, and a few sailing barges are seen in the backgound. Ships of this era are a pleasure to paint, being stylish, well proportioned and….well, they just look “right”. A far cry from the modern containerships, ferries and the like.

From the brush of David Bray Yellow Peril As a kid in Great Yarmouth, the coasters of F T Everard were a familiar sight. There …

From the brush of David Bray Saga Ruby Delivered in 1973 for Norwegian American Line, and originally named “Vistafjord”, the “Saga Ruby” was the last …