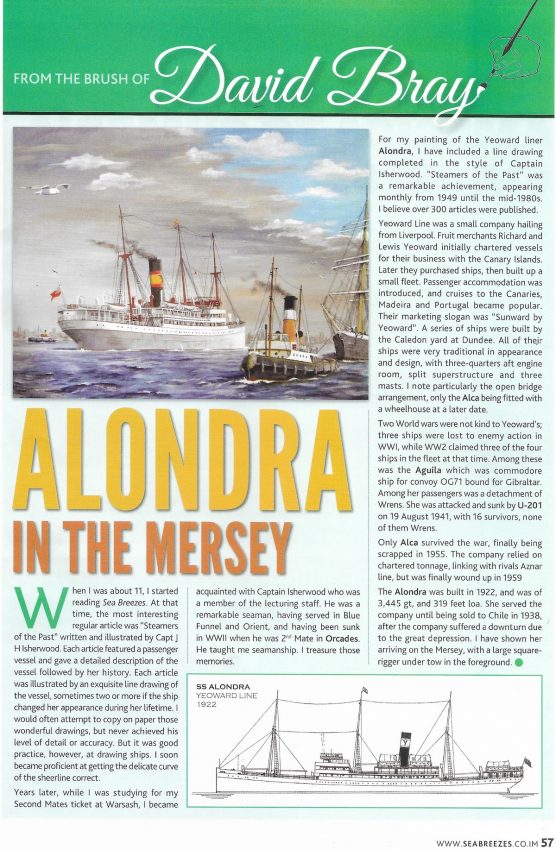 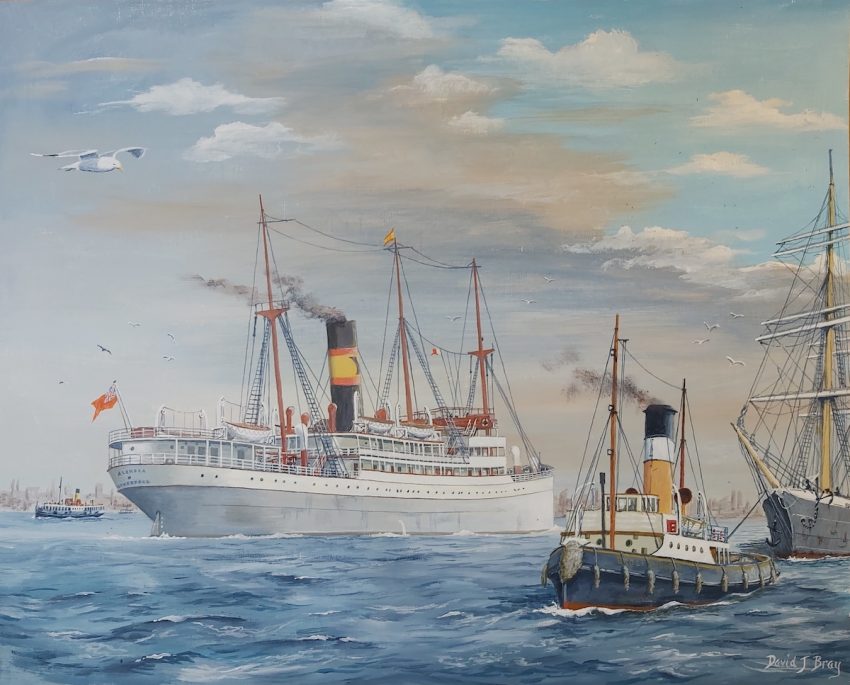 ALONDRA in the Mersey

When I was about 11 I started reading “Sea Breezes”. At that time the most interesting regular article was “Steamers of the Past” written and illustrated by Capt. J H Isherwood. Each article featured a passenger vessel, and gave a detailed description of the vessel followed by her history. Each article was illustrated by an exquisite line drawing of the vessel, sometimes two or more if the ship changed her appearance during her lifetime. I would often attempt to copy on paper those wonderful drawings, but never achieved his level of detail or accuracy. But it was good practice, however, at drawing ships. I soon became proficient at getting the delicate curve of the sheerline correct.

Years later while I was studying for my Second Mates ticket at Warsash I became acquainted with Captain Isherwood who was a member of the lecturing staff. He was a remarkable seaman, having served in Blue Funnel and Orient, and having been sunk in WW2 when he was 2nd Mate in “Orcades”. He taught me seamanship. I treasure those memories.

For my painting of the Yeoward liner “Alondra” I have included a line drawing completed in the style of Captain Isherwood. “Steamers of the Past” was a remarkable achievement, appearing monthly from 1949 until the mid-1980s. I believe over 300 articles were published.

Yeoward Line was a small company hailing from Liverpool. Fruit merchants Richard and Lewis Yeoward initially chartered vessels for their business with the Canary Islands. Later they purchased ships, then built up a small fleet. Passenger accommodation was introduced, and cruises to the Canaries, Madeira and Portugal became popular. Their marketing slogan was “Sunward by Yeoward”. A series of ships were built by the Caledon yard at Dundee. All of their ships were very traditional in appearance and design, with three-quarters aft engine room, split superstructure and three masts. I note particularly the open bridge arrangement, only the “Alca” being fitted with a wheelhouse at a later date.

Two World wars were not kind to Yeoward’s; three ships were lost to enemy action in WW1, while WW2 claimed three of the four ships in the fleet at that time. Among these was the “Aguila” which was commodore ship for convoy OG71 bound for Gibraltar. Among her passengers was a detachment of Wrens. She was attacked and sunk by U-201 on 19th August 1941, with 16 survivors, none of them Wrens.

Only “Alca” survived the war, finally being scrapped in 1955. The company relied on chartered tonnage, linking with rivals Aznar line, but was finally wound up in 1959

The “Alondra” was built in 1922, and was of 3,445 gt, and 319 feet loa. She served the company until being sold to Chile in 1938, after the company suffered a downturn due to the great depression. I have shown her arriving on the Mersey, with a large square-rigger under tow in the foreground.