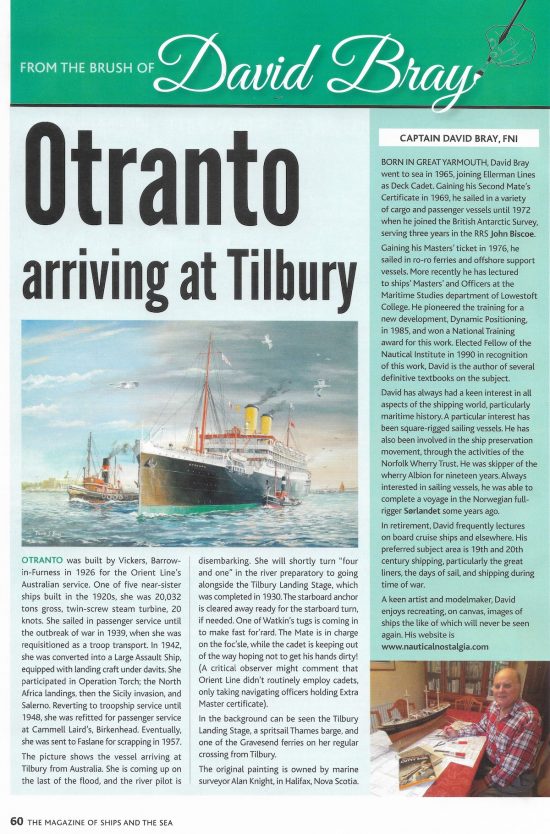 The venerable ‘Sea Breezes’ magazine which celebrated its centenary in 2019, is featuring some of David’s paintings in a series called ‘From the brush of David Bray’.

First up is the painting of Otranto arriving at Tilbury. Here’s the story behind it.

OTRANTO was built by Vickers, Barrow-in-Furness in 1926 for the Orient Line’s Australian service. One of five near-sister ships built in the 1920’s, she was 20,032 tons gross, twin-screw steam turbine, 20 knots. She sailed in passenger service until the outbreak of war in 1939, when she was requisitioned as a troop transport. In 1942 she was converted into a Large Assault Ship, equipped with landing craft under davits. She participated in Operation Torch; the North Africa landings, then the Sicily invasion, and Salerno. Reverting to troopship service until 1948, she was refitted for passenger service at Cammell Laird’s, Birkenhead. Eventually she was sent to Faslane for scrapping in 1957.

The picture shows the vessel arriving at Tilbury from Australia. She is coming up on the last of the flood, and the river pilot is disembarking. She will shortly turn “four and one” in the river preparatory to going alongside the Tilbury Landing Stage, which was completed in 1930. The starboard anchor is cleared away ready for the starboard turn, if needed. One of Watkin’s tugs is coming in to make fast for’ard. The Mate is in charge on the foc’sle while the cadet is keeping out of the way hoping not to get his hands dirty! (A critical observer might comment that Orient Line didn’t routinely employ cadets, only taking navigating officers holding Extra Master certificate).

In the background can be seen the Tilbury Landing Stage, a spritsail Thames barge, and one of the Gravesend ferries on her regular crossing from Tilbury. 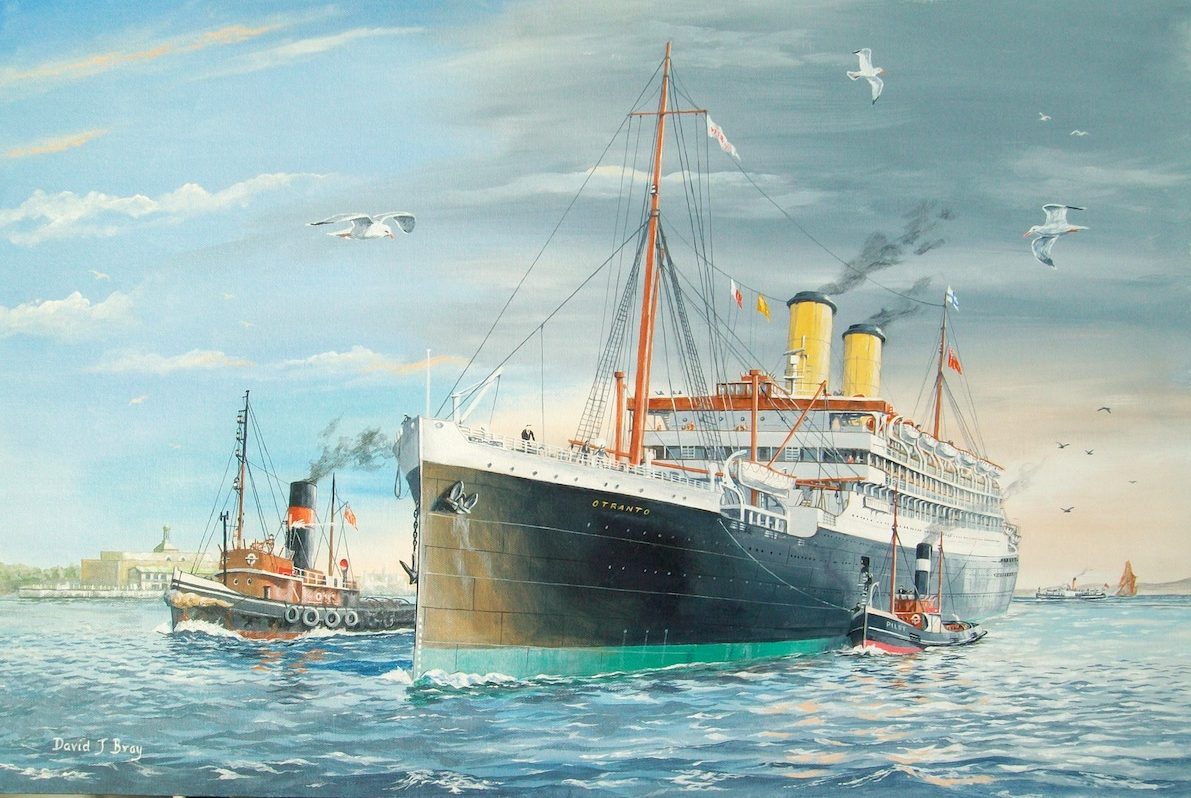 From the brush of David Bray Royal Archer This article, and others,  follow a series which Sea Breezes magazine is publishing, featuring David’s paintings, and …

From the brush of David Bray Yellow Peril This article, and others,  follow a series which Sea Breezes magazine is publishing, featuring David’s paintings, and …

From the brush of David Bray Saga Ruby This article, and others,  follow a series which Sea Breezes magazine is publishing, featuring David’s paintings, and …

From the brush of David Bray Larpool This article, and others,  follow a series which Sea Breezes magazine is publishing, featuring David’s paintings, and the …

Sirdhana on the Hooghly River

From the brush of David Bray Sirdhana on the Hooghly River This article, and other to come,  follow a series which Sea Breezes magazine is …

The Tale of “Teapot” First published in the NWT Journal, Spring 1989 by “Leveret” (David Bray) The wherry lay on the White Swan quay in …

Random Jottings of a Skipper

Random Jottings of a Skipper First published in the NWT Journal, Autumn 1986  Author: Admiral Elsan (David Bray) Quanting up to West Somerton I would like to …

Breydon Days On 28th June 2019 “Albion” and “Maud” sailed in company across Breydon”.  I would guess that this was the first time in eighty …

Footsteps of Arthur Ransome First published in the Spring 1984 NWT Journal. Author: Leveret (David Bray) Arthur Ransome Some things are precious, and among our …