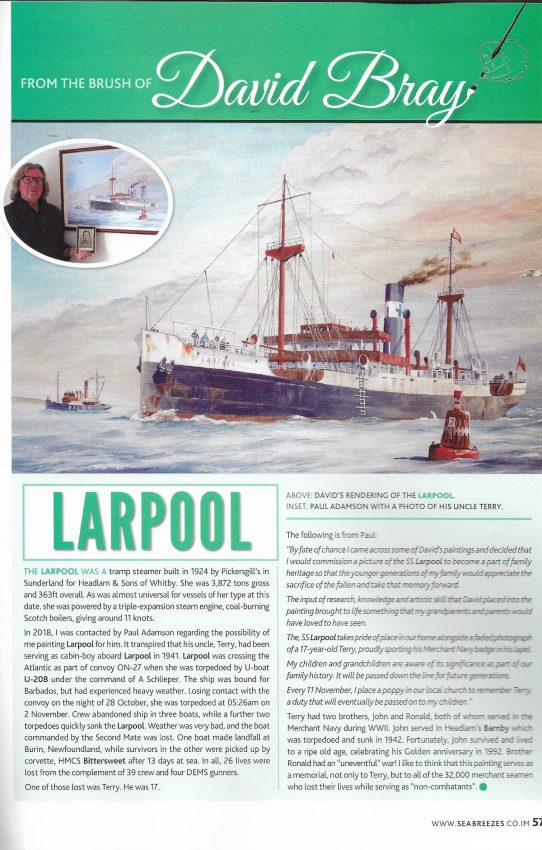 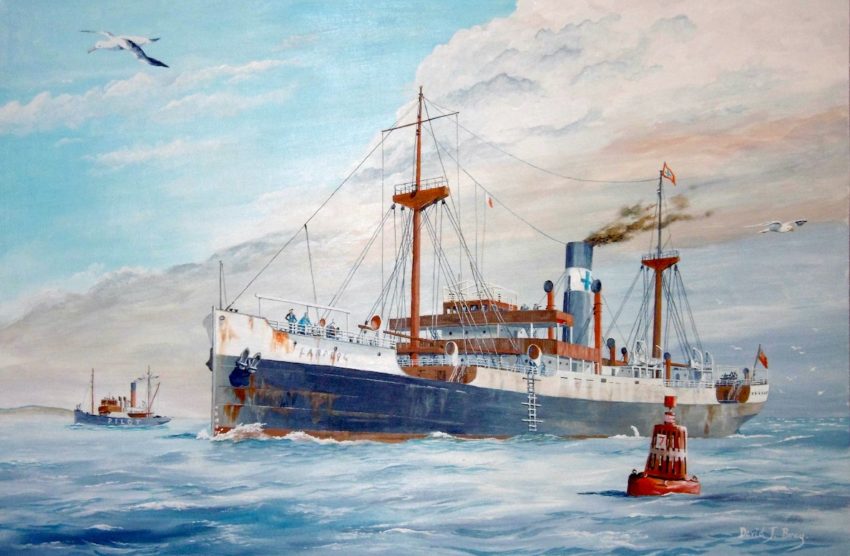 The “Larpool” was a tramp steamer built in 1924 by Pickersgill’s in Sunderland for Headlam & Sons of Whitby. She was 3,872 tons gross and 363ft overall. As was almost universal for vessels of her type at this date, she was powered by a Triple-expansion steam engine, coal-burning Scotch boilers, giving around 11 knots.

In 2018 I was contacted by Paul Adamson regarding the possibility of me painting “Larpool” for him. It transpired that his uncle, Terry, had been serving as cabin-boy aboard “Larpool” in 1941. “Larpool” was crossing the Atlantic as part of convoy ON-27, when she was torpedoed by U-boat U-208 under the command of A Schlieper. The ship was bound for Barbados, but had experienced heavy weather.

Losing contact with the convoy on the night of 28th October, she was torpedoed at 05:26 am on 2nd November. Crew abandoned ship in three boats, while a further two torpedoes quickly sank the “Larpool”. Weather was very bad, and the boat commanded by the Second Mate was lost. One boat made landfall at Burin, Newfoundland, while survivors in the other were picked up by corvette, HMCS Bittersweet after 13 days at sea. In all 26 lives were lost from the complement of 39 crew and four DEMS gunners.

The following is from Paul:

“By fate of chance I came across some of David’s paintings and decided that I would commission a picture of the SS “Larpool” to become a part of family heritage so that the younger generations of my family would appreciate the sacrifice of the fallen and take that memory forward.

The, SS “Larpool” takes pride of place in our home alongside a faded photograph of a 17 year old Terry, proudly sporting his Merchant Navy badge in his lapel.

My children and grandchildren are aware of its significance as part of our family history. It will be passed down the line for future generations.

Every November 11th, I place a poppy in our local church to remember Terry, a duty that will eventually be passed on to my children.”

Terry had two brothers, John and Ronald, both of whom served in the Merchant Navy during WW2. John served in Headlam’s “Barnby” which was torpedoed and sunk in 1942. Fortunately John survived and lived to a ripe old age, celebrating his Golden anniversary in 1992. Brother Ronald had an “uneventful” war! I like to think that this painting serves as a memorial, not only to Terry, but to all of the 32,000 merchant seamen who lost their lives while serving as “non-combatants”.