Ten and a Chinaman
(Why nautical speed is measured in knots)

Ship speed is measured in “knots”, a knot being a speed of one nautical mile per hour. I am occasionally asked why this unit is so named.

Back in the days of sail, with no modern technology of any kind, it was important that a record be kept of the distance the ship had sailed. This was to allow the Master to calculate the ships position from a reckoning of courses steered and distance made good since the last positive “Fix”. This technique is known as “Dead Reckoning”, the “Dead” really meaning “deduced”. In a sailing ship the ships speed was measured every hour, and recorded in the “Log Book” (hence the name of that document in ships, aircraft and elsewhere).

Speed was measured using a crude piece of equipment known as the Log. This consisted of a canvas drogue attached to a length of light line. The line was stowed on a reel and had a knot tied in it at 47 foot intervals. A thirty-second sandglass was also provided. 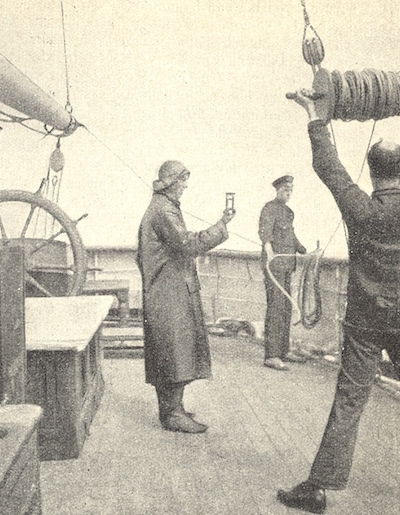 To “Stream the Log” the ship’s apprentices would gather on the poop, and the drogue paid out over the stern. As the ship sailed away from the drogue, the line paid out freely from the reel. When the first knot ran out the sand glass would be turned. Thirty seconds later the line would be grabbed and recovered. The number of knots would indicate the ship’s speed.

When I first went to sea, this “technology” was a thing of the past, but what we used then would still be viewed as stone-age today. The Walker patent log consisted of a finned torpedo on the end of a long line. This was streamed astern, and turned in the ships wake. Mounted on the taffrail was a clock device which effectively counted the turns of the rope, reading out in miles made good. We cadets had to read this device every hour, reporting to the Officer of the Watch. At that time, navigators would often refer to a small fraction of a knot as a “chinaman” thus 14.2 would be referred to as “fourteen and a chinaman”. Where did this term come from?

A probably apocryphal story provides the explanation. A sailing ship was underway in the ocean, hundreds of miles from land. The apprentices were aft, streaming the log under the supervision of the Captain. While this was going on, the Chinese cook came on deck with a bucket of potato peelings, and ditched them overboard. Unfortunately he chose the wrong side of the ship, the windward side, and they all blew back, most of them ended up plastered all over the Captain!

The Captain, quite understandably, picked up the hapless cook and threw him overboard (as you would)!

So the Chinaman was thrashing around in the ocean while his ship sailed away from him. He was going to drown! He couldn’t swim. Suddenly he realised he had grabbed a rope, but it was wet and he couldn’t get a grip on it. Then, his hands snagged a knot which allowed him to hold on. A few minutes later the apprentices bundled the sodden, terrified but relieved cook over the rail.

The Captain came over and said to the apprentices “What’s she doing, then?

“Ten and a Chinaman, Sir”