On 28th June 2019 “Albion” and “Maud” sailed in company across Breydon”.
I would guess that this was the first time in eighty or more years that two black-sailed trading wherries have been seen together on Breydon. I’d have given my eye teeth to have been there!

Those pictures reminded me of two particular trips across Breydon in my days as Skipper. Neither of them went to plan.

The first was in about 1977, and it was a Members’ cruise doubling as a positioning voyage. We were relocating from the North river to Surlingham Ferry, where we had obtained permission from the Ferry House landlord to moor for the season.

The sail down the Bure was uneventful. Wind moderate SW forecast to back to S and strengthen during the day. Passing under the bridges at Runham and Vauxhall, we raised the gear and entered the Yare. At that time there was no Breydon bridge; the old railway swing bridge had been demolished some years before, and the lifting road bridge was some years in the future.

Sailing out onto Breydon, it was obvious that the wind had backed round to about S by E and strengthened considerably while we were passing through the bridges. I turned one reef down and off we went. That was an exciting sail! Close reach port tack, sailing fit to bust. Starboard plankway lapping the water, three on the tiller. Albion was snoring along. I was mindful of the fact that it was about here many years previously, in similar conditions, that the mast broke! It took us about 20 minutes to cover the three miles to Burgh castle. At the South end of Breydon, the river narrows and trends to the South at a point known as the “bottom dickeyworks” leading to the reach called Burgh flats. From there it is about half a mile to the Waveney confluence. We were bound up the Yare, so would have to put in a couple of tacks before bearing away up the Yare.

I was keeping her close to the line of red posts marking the East (port) side of the channel. As the channel trended to the South, I hardened up on the wind, close-hauled on the port tack. But eventually had to peel off and stand across the river on a long board. She was still footing very fast, and came about at the end of that tack no trouble. We were now standing across the river on starboard tack, the short tack, almost square across the river. Speed had dropped drastically and I prepared to go about again. Heading for a red channel marker post, I put the helm down. Wherries are not at their best reefed, windage aloft is considerable, while sail is reduced. She was very sluggish. We passed the red post and came head-to-wind about ten feet outside the channel, and stopped! Not aground, just in irons. In any conventional craft, you would back the jib, but wherries don’t have…… 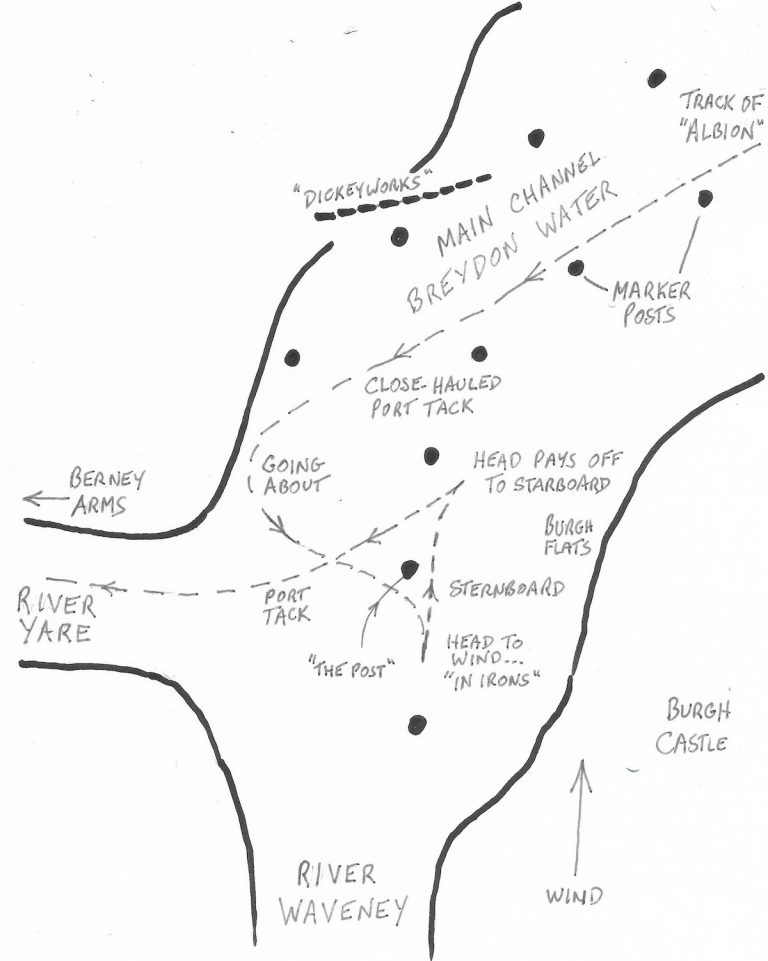 With the red post now on my starboard quarter, she started making way astern. I desperately needed the bow to pay off to starboard. If it paid off to port we would drive into the shallows and be hard aground. I put the tiller to starboard, catching a turn on it with the end of a mooring rope. Going astern the load on the rudder is very heavy, and I knew I wouldn’t be able to hold it by hand. Making fast the rope on the timberhead prevented the rudder from going right round ending up lying uselessly against the hull. The red post passed stern to bow down our starboard side.

Fortunately, to my HUGE relief, the rudder canted the stern to port, and the bow paid off to starboard, and the sail filled. Hauling the tiller amidships, I held my breath, as without headway I didn’t know whether she would fill away and sail, or just luff up against the helm into irons again. She picked up speed and sailed…phew! Hardening up on port tack we just weathered the corner, and bore away into the Yare. Somebody said “we’ve just sailed full circle round that post backwards”. Not a manoeuvre you will find in the Skippers’ handbook!

A few minutes later we moored for the night at Berney Arms. The first pint didn’t touch the sides. Come to that nor did the second, third…….

The following day we completed an uneventful trip up to Surlingham, and put her on her new mooring.

Many years later, I found myself taking her in the opposite direction. This was 1986, the Ludham base had been established, and a new bridge spanned Breydon. This latter is a modern lifting bridge carrying the new bypass.

Albion had been visiting the southern rivers, and was moored on Oulton Broad. I had arranged some Trust members and friends to help sail her back to Ludham. The date decided upon was Wednesday 30th July, having low water at Yarmouth at about 11.30 am. Albion was then, of course, a pure sailing vessel with no power, so it was necessary to use the tides to best advantage. Wind we cannot lay on to order, but I needed a light-to-moderate southerly. Tuesday blew a westerly gale but by the Wednesday morning that had blown itself out with South, force 3 to 4 forecast.

Breydon Bridge was likely to cause us problems. I wanted to try out the practicalities of working Albion through the new and old hazards at Yarmouth in the traditional manner. The previous day a phone call to the bridge informed them of our e.t.a. and requested a bridge lift on arrival. I carried a vhf radio for communications with the bridge on channel 12. 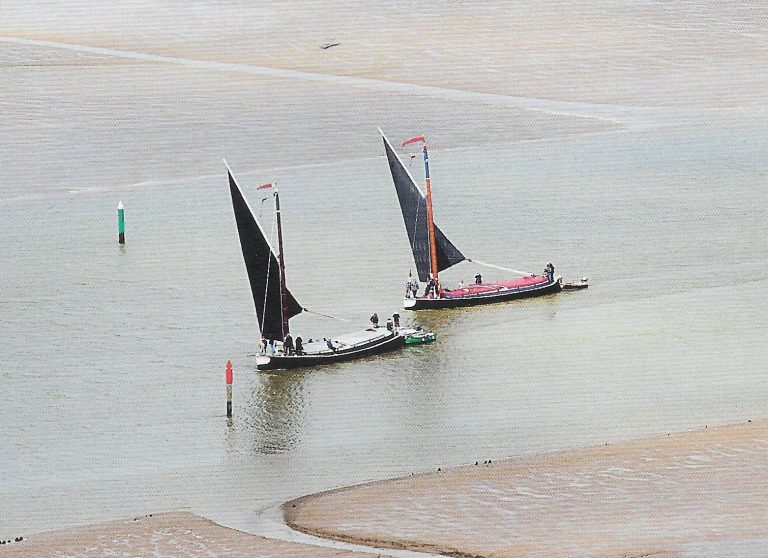 A quarter-to-six on the Wednesday morning. Bright and sunny. Mist hanging over the broad. Ten bleary-eyed people muster on board. No wind at all. Underway with sail set (full sail and bonnet) by six, quanting. A light westerly sprang up at Tea Gardens Corner and she trickled along quite happily. Very conveniently Somerleyton Swing Bridge opened for us. We were losing time. Although the ebb was running strongly, we had lost a lot of time quanting before the wind appeared. We had, of course, to lower the gear for St Olaves bridge, and here I nearly came a cropper. Lowered the sail, cleared the gaff jaws away from the mast and swung the winch barrel aside. Opening the Carlin hatch to allow the mast counterweight to swing up, I dropped the Carlin hatchboard down the forepeak. With the bridge coming up fast and the mast still up I had to jump down there and fish it out sharpish! Carlin hatch extracted in double quick time, followed by myself, I lowered the mast. Actually we still had 50 yards or so to go to the bridge.

With the wind now SSW good progress was made with us arriving on Breydon Water at about 11.15. Radio contact was made with the bridge (the first time ever that a wherry has come up on vhf?) and they confirmed they were all ready to lift for us. The wind was now South, force 4 so we had a fast trip across Breydon, arriving at the bridge at about 11.50. By then the wind had backed to the SSE which meant it was scant (closehauled) in the bridge channel, and the flood was just starting to make up. The yodellers went off, red lights flashed and the traffic tailed back. The bridge span started to lift, and instantly gave us a massive windshadow – a quarter of a mile before we got there! The new bridge is a vast bit of engineering, and the lift span raises to two or three times the height of Albion‘s mast. With the wind all over the place and the sail alternately flogging and drawing, we carried our way slowly through the bridge. I was hoping for clear wind on the far side, but the wind persisted right on the nose. With no room to bear away and sail Albion slowly came to a halt about one hundred and fifty yards downstream of the bridge. Sail was lowered quickly, and the mudweight dropped. The bridge closed behind us, and the mudweight started dragging! Wind and tide were taking us back towards the closed bridge. The second mudweight was dropped and the mast lowered. Lowering the mast reduced the windage and therefore the weight on the dropping-chains, and the mudweights held.

For a while our situation was a little precarious. When the flood started to run strongly our mudweights would certainly drag. The water was far too deep to quant and it was not safe to set sail with the bridge just to leeward of us. I considered using one mudweight at a time to kedge forward the three hundred yards to the Bure mouth, but couldn’t guarantee the remaining weight would hold on it’s own. In the end I took the easy way out and requested assistance from a motor cruiser. He was going the other way, and came alongside on our port side facing aft. I decided not to turn him, just adding a towing spring from his stern to our stern timberhead. He could tow us just as well going astern as ahead. Asking him to keep his helm amidships, and his engine half astern, we picked up the mudweights and very gently edged our way into the Bure, and alongside Lee Barbers Wharf.

The ebb was still running on the Bure – slack water there being over an hour after slack water on the Yare, so we had lunch while we waited for the flood to make. The last sailing vessel I saw on that berth was the mulie barge “Cambria”, skipper Bob Roberts, still in commercial trade about 1969.

After lunch the opportunity was taken to linseed oil the mast, and since the wind was now SSE force 5 to 6 we took a reef in the mainsail. Quanting through the two bridges, up mast and up sail by 2 pm. I had hoped to reach Acle by evening, leaving a short sail to Womack on the following day. However, with a fair wind and tide, and only two headwind reaches (Ash Tree Farm and the Duffers) we arrived at Acle shortly after 4 pm. I decided to press on, always being loth to waste a fair wind and tide. We arrived at Womack and made fast by 6 pm. Not a bad day’s work, I reckoned.