In 2020 I was contacted by Simon Adams of Southampton, who was in possession of a part-built scale model of the barque “Penang”. The model had been started by his father in about 1935, but had never been completed. Like myself, Simon is an ex- seafarer, sailing as Engineer in the Royal Mail line in the 1960s, around the same time as I was sailing as Cadet in Ellerman line.

The barque “Penang” was built in 1905 by Rickmers in Bremerhaven to their own account. Her original name was “Albert Rickmers”. She was steel-hulled, 2,039 tons gross, 3,250 dwt, and 266 ft length. She was representative of the final generation of ocean-going sailing cargo carrier. Barque-rigged, masts and spars of steel construction, with a donkey-boiler driving steam winches. Bluff lines show no pretence to speed, being built to carry capacity bulk cargoes. 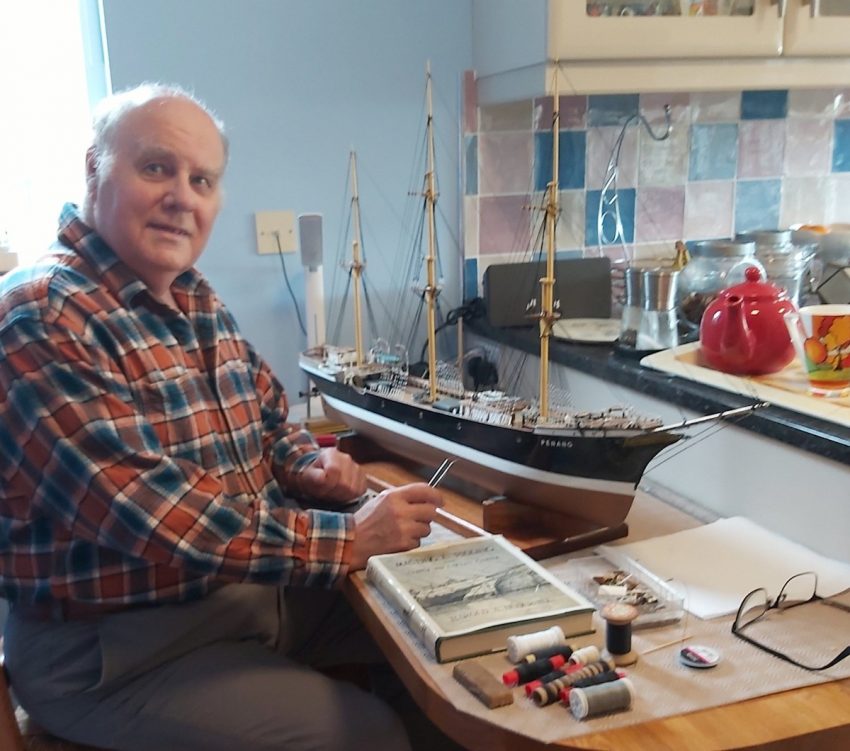 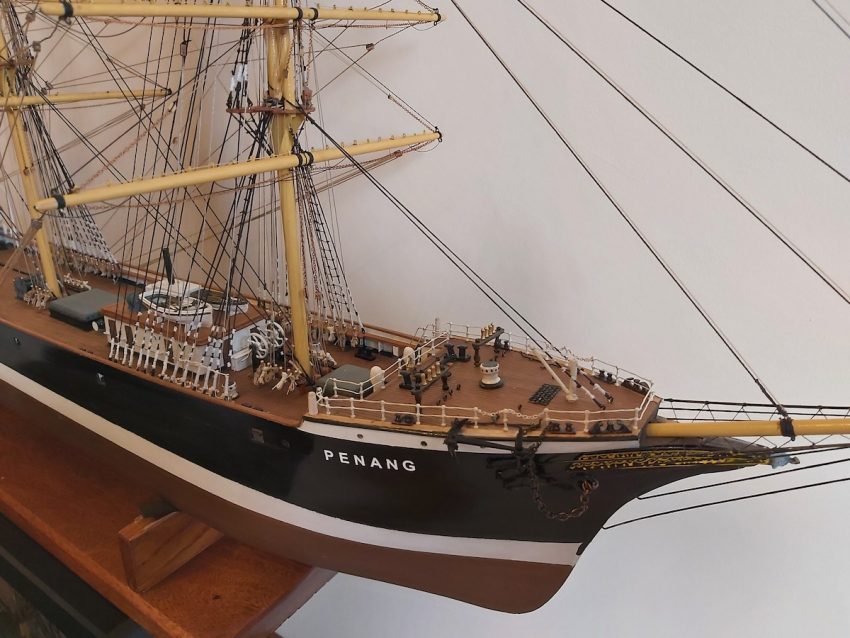 In 1910 she was sold to F Laeisz for their ‘P Line’, and renamed “Penang” she carried cargoes of phosphates from South America. After the Great War she changed hands twice before being sold to shipowner Gustav Erikson, of Mariehamm, Finland. Eriksson maintained a considerable fleet of sailing ships during the inter-war years, and traded them very successfully at a time when deep-water sail was fast becoming a thing of the past.

As such, she participated in the famous “grain races” bringing Australian wheat to the UK from the Spencer Gulf. These so-called “races” started in 1928, and saw up to twenty or more large sailing vessels, all owned by Erikson or Lundquist, making an annual voyage from Australia to London, or a western European port. Not races in the accepted meaning of the word, nevertheless there was great rivalry between the ships’ Masters to make the fastest passage. This swan-song of sail ended with the outbreak of World War 2.

The model as received was a very substantial hull of bread-and-butter construction, about 33″ in length. No deck fitment or rigging was in place, although many of the spars and other fittings were collected in a box. No work had taken place on the model for years. It was a daunting challenge. Of interest was some fascinating correspondence between Simon’s father and Harold A Underhill, dating from 1935, regarding details of the ship.

Harold A Underhill was an author and draughtsman with an overarching interest in sailing vessels. He wrote a number of authoritative volumes on various aspects of sailing vessel history. He also produced numerous sets of highly accurate drawings of a great variety of sailing vessels. This treasure trove of information has proved a godsend to marine students and modelmakers for many years.

Drawings of “Penang” are available, from the Underhill collection, published by Brown, Son and Ferguson. Copies were acquired, and my venerable copy of “Masting and Rigging the Clipper Ship and Ocean Carrier”, also by Underhill, was unearthed. The magnitude of the task was beginning to dawn on me! Where to start?

I decided to make a start on the main deck. The deck itself and bulwarks were in place, but no bulwark fitments. Bulwark stanchions and pinrails were fitted, together with chainplates, carefully located relative to the mast positions. It is important that chainplates are installed securely in such a model. They carry the cumulative load of all the shrouds and backstays, and the last thing the modeler needs is one of the chainplates coming adrift at a late stage of the rigging.

The interior of the hull was accessed by three hatchways; the original vessel’s cargo hatches. I made three hatchcovers to be a snug fit in the deck apertures, but simulating the canvas covers secured by battens and wedges of vessels of this era.

I was modelling the vessel as she would have appeared when the 15-year old Lloyd Adams visited her. By then she was owned by Erikson, and had been fitted with a mechanical bilge pump by the foremast, while on the poop a charthouse had been fitted. This latter had been salvaged from the 4-mast barque “Hougomont” in 1933. 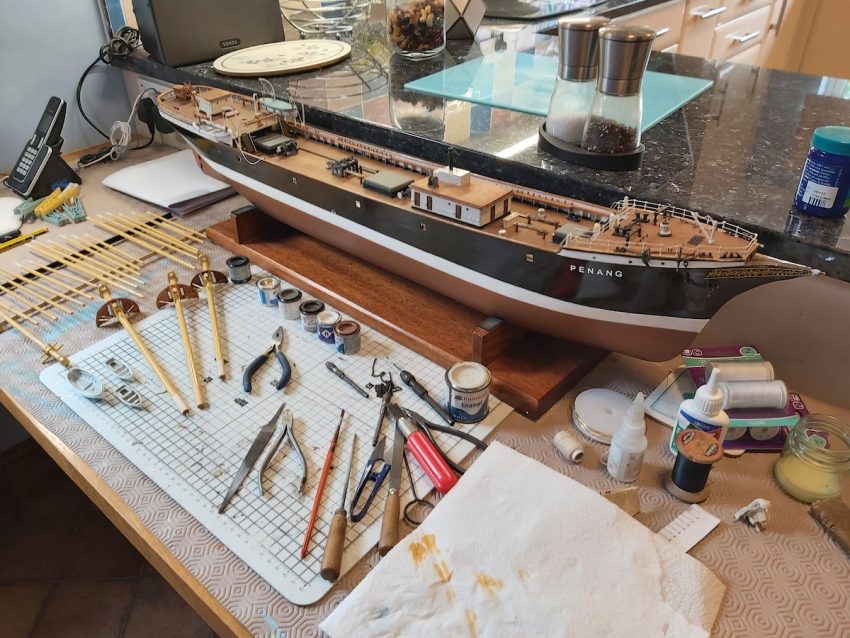 Well-deck fittings included two Jarvis bracewinches. These ingenious devices were invented by Captain Jarvis, of the barque “Lawhill” to simplify the business of handling the yards when going about from one tack to the other.

The braces are led downwards from aloft to the winch which carries three sets of double-tapered drums, all geared together. The whole unit is operated by crewmen turning crank handles, allowing three yards of the mast to be trimmed together.

The tapered drums allow for the fact that when trimming a yard, the amount paid out on one brace is not always the same as the amount hauled in on the other. Jarvis winches were fitted in many vessels during this era, and represented an improvement in safety for the crew, as they could stay close to the centreline, instead of having to work close to the rails, where, in bad weather green sea could come aboard, sometimes washing away the hapless crewmen struggling to trim the yards.

My Myford lathe came in useful in turning the tapered drums for these winches. The winch for the foremast yards is located just abaft the mainmast, in full view, while the mainmast winch is located under the poop deck, accessed from above by an open well, railed off. This winch could be simpler in construction, as it is barely visible on the model.

The fo’c’sle was fitted out with the normal arrangement of anchors and mooring gear. This vessel carried a donkey boiler providing steam for several cargo winches and the anchor windlass, located under the foc’s’le. One anchor was shewn stowed, the other “catted” and ready to drop. A tiny brass bell was turned on the lathe and fitted in the correct location on the after foc’s’le handrails.

Four boats were carried. Here I tend to “cheat” and buy in scale boats of the appropriate type from Quaycraft. Their resin cast boats are superb. Never in a million years would I be able to build a clinker lifeboat 3” long and have it looking “right”. Two boats were located on the midships deckhouse, the others were hung in radial davits on the poop. One was portrayed in the stowed position, with a carefully-made “cover” made from paper. 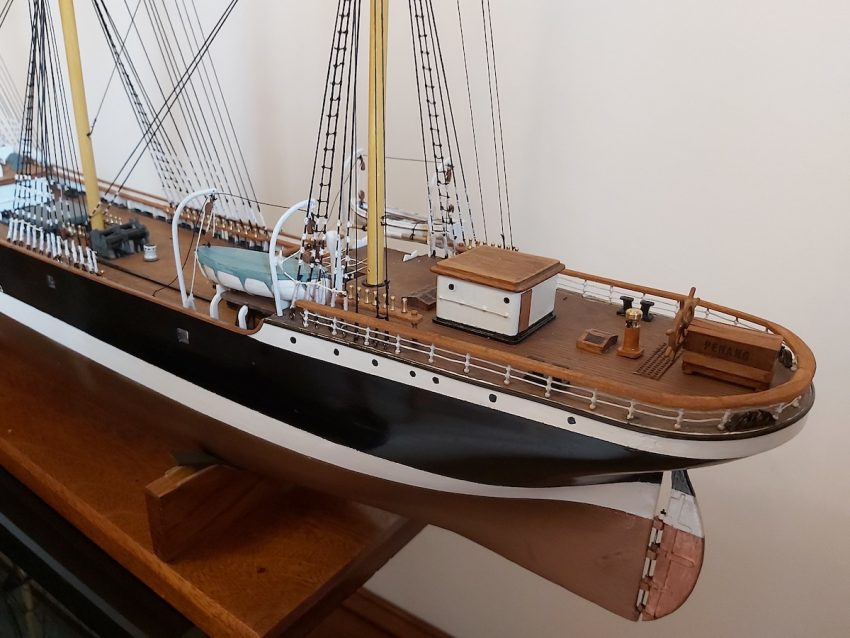 The other was shown turned out on it’s davits, bowsed in to a bearing spar. Three of the boats were open, and oars were made from brass wire, hammer-flattened for a short length at the ends to make the blades, then painted.

Belaying-pin rails were fitted in the correct locations, with the correct number of pins provided for the securing of running rigging. These rails are another example of an item which must be very securely fitted. Bit of a disaster if, at a late stage during the rigging, one of the pinrails comes adrift from the deck, especially if there are eight fully-rigged pins on it! A very useful diagram is contained in Underhill’s “Masting and Rigging” showing the belaying plan for a vessel of this type. 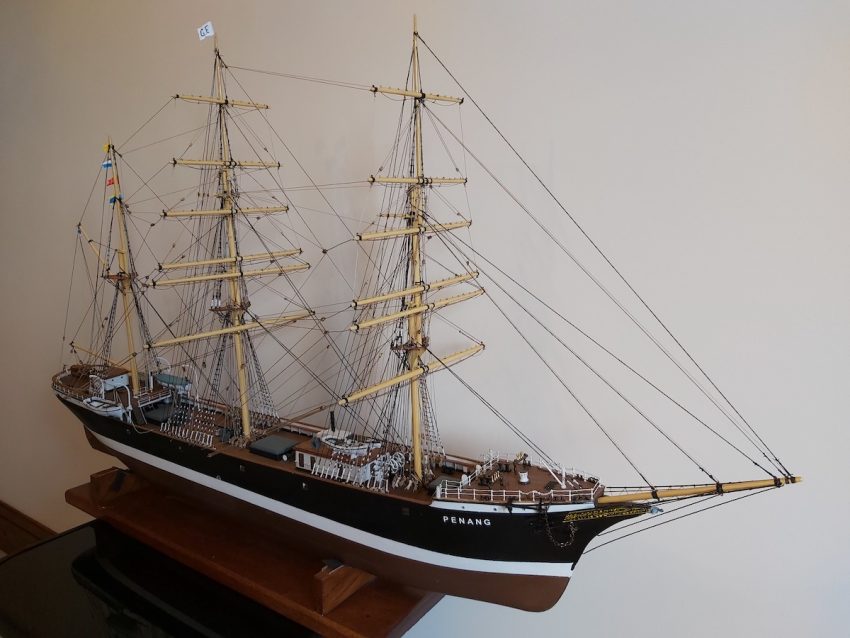 Many years ago I sailed in the Norwegian full-rigger “Sørlandet”, and remember having to learn the locations of every rope belayed.
None were labelled, and there were dozens and dozens of them. It was essential that if the order came to “let go the starboard main t’gallant sheet” that the correct rope was cast off. This might very well be in the dark.

Having completed the fitting-out of the hull, it was time to address the masting and rigging. When I received the hull, I also was given a box of roughly-shaped spars. Some were labelled (not all correctly) and some not. It was a bit of a marathon to identify which was which, but eventually sorted. Masts were built with all the fittings, eyes, chocks etc. and masts were stepped.

It is vitally important that masts are absolutely vertical athwartships, and rake correctly. On the sail plan, all masts rake at the same angle, but I have learned from past experience that it is better to increase the rake slightly, fore to aft, so that the foremast might rake 3˚, the main by 4˚ and the mizzen by 5˚. This ensures that the masts don’t give the illusion of converging upwards, which ruins the appearance.

Bowsprit made and fitted, then all standing rigging installed. “Penang” was rigged with steel masts and spars, and steel wire stays set up with bottlescrews. Total of 49 stays, with ratlines on the shrouds. I always have a pot handy with a weak solution of PVA glue with water, which is “painted” on all rigging knots and hitches to prevent them unravelling.

Then came the construction of the yards. Sounds simple? Well, each yard comprises about 36 separate parts, including the truss fittings (where the yard pivots onto the mast) the jackstays on top of the yard, the footropes and stirrups suspended beneath the yard, several blocks hung form the yard quarters, and the end fittings. Each yard took several days to complete.

Starting with the lower yards on the fore and main, each yard was rigged with clewlines and sheets, then carefully fitted onto the mast. Once in place the rigging of the yard was completed with lifts, downhauls, halyards (called “Tyes” in square-riggers), braces and other lines. In rigging a model I tend to work the opposite way to how it is done in full-size practice. 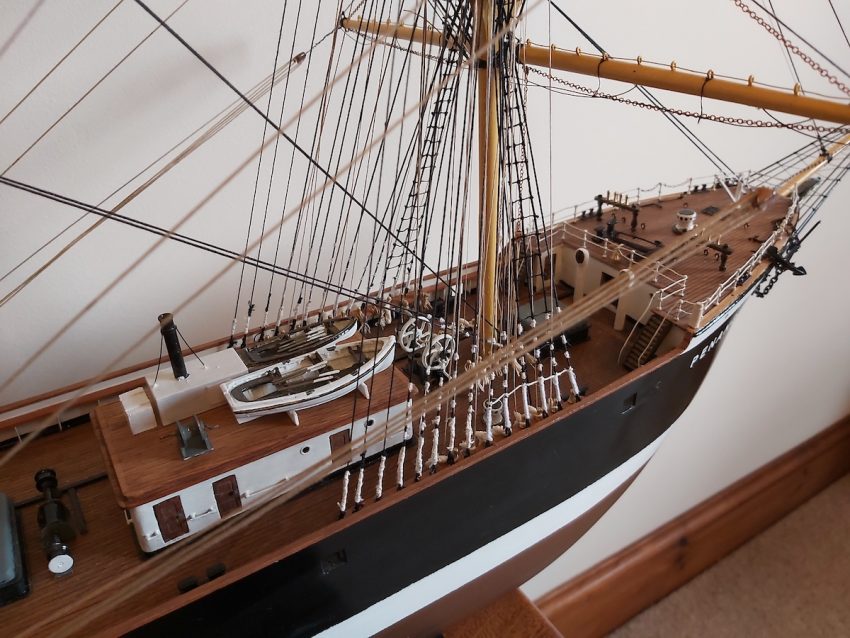 I then lead the line aloft and rig it as needed. A small coil of the same line is made separately and hung on the belaying-pin to represent the excess of rope coiled up. I have found out the hard way that securing a rope at this scale using figure-eight belay, then coiling up the excess and trying to hang it on the pin is almost impossible.

Yard by yard the barque began to come alive. The running rigging was oh so tedious, and I began to look forward to the day when it was complete. I was portraying the barque without sails, and much of the minor rigging sent down. I never show sails set on my models.

I follow the convention that, if the model is shown full-hull, then sails should not be set. If sails are to be set, then the vessel should be a waterline model, in a life-like sea, heeling to the breeze. I’m always nervous at seeing a full-hull model on a stand, with full canvas set. Always looks to me that she would blow over in a gust!

Eventually, after weeks of work, the two forward masts were fully rigged. Rigging the mizzen with gaff, boom and associated sheets, vangs, topping lifts and spans was a comparative doddle, and only took an afternoon. Another day was spent clipping off any “Irish pennants” or loose ends of cordage, and finally securing the rigging with my PVA solution.

The final job was to make and fit the flags. Finnish national flag at the gaff peak (white, blue St Georges cross) houseflag at the mainmast head (White, blue “GE”). The vessels callsign (or “numbers”) was needed. I eventually found reference to this in the website on U-boat attacks. 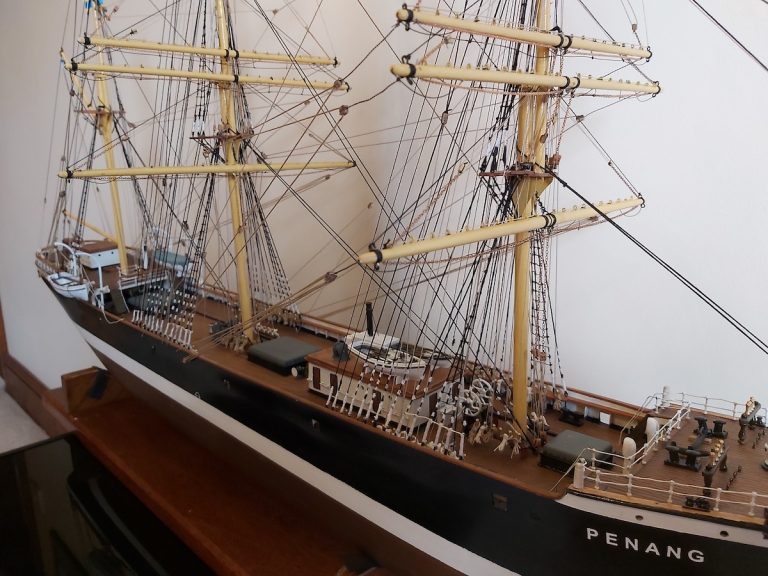 “Penang” was sunk by torpedo from U 140 on 8th December 1940. There were no survivors. The information contained in the U-boat website show that the “Penang” callsign was QJBD, so flags were made showing this hoist from the mizzen masthead.

So, this major project complete, after 7 months, and ready to return to her owner, Simon Adams.