Please select from the list above to see testimonials from people who have commissioned paintings.

This I believe was due to his use of acrylic paint which gave the picture its modern lifelike qualities.

I was so impressed that I commissioned him to paint a picture of my last ship in 1959, the BP tanker “British Merchant”, off Aden. Whilst the detail is superb, I also asked him to include a small Arab dhow in the foreground, The attention to detail of this small vessel is amazing and completely sets the picture alive’ 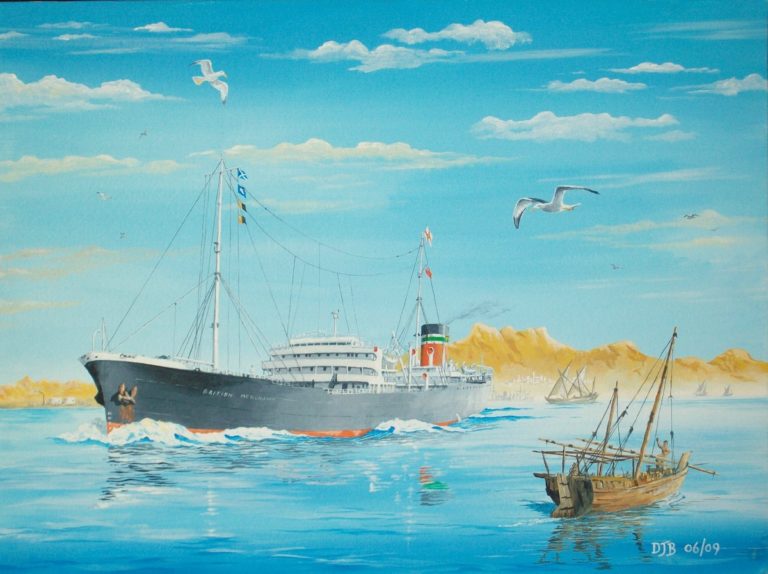 “For several years my husband and I have been searching for a painting, unsuccessfully, reminiscent of Portsmouth, my husband’s home town.
A meeting with Captain David Bray ended our search.

Whilst listening to a talk given by Captain Bray on ‘’Nautical Nostalgia’ we noticed a display of several of his paintings at the side of the stage.

We knew from his enthusiasm, attention to detail and his painting skills, that we wanted him to have our commission. He did not disappoint us!

‘Victory’ is shown here a few years prior to her famous encounter at Trafalgar, leaving Portsmouth Harbour – exactly as my husband and I had envisaged. A wonderful piece of art, and now part of our family history!

Fair winds and following seas to you David, and to your wife Mary.” 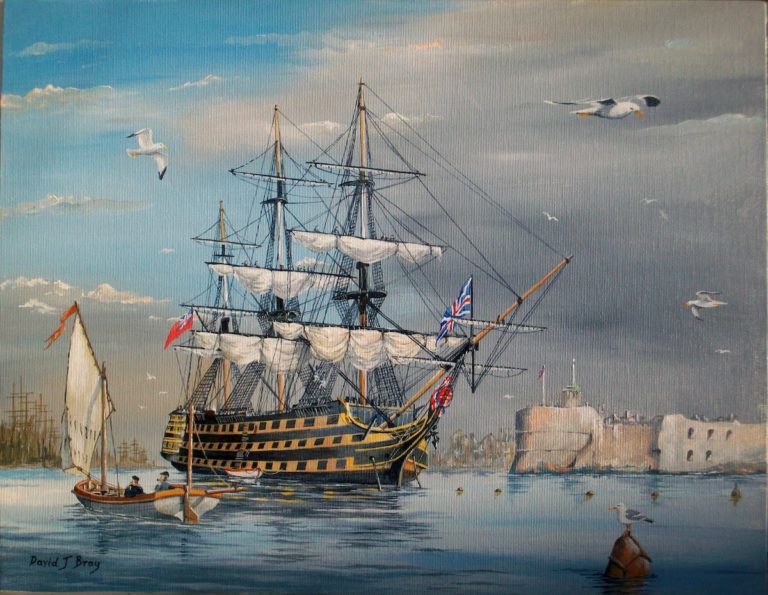 We have been on five cruises on the “Marco Polo” and hope to go on more. One of the reasons we like the ship is that she is traditional looking, rather than like some other cruise liners that can be ugly floating hotels. She always looks good moored at the various ports we have visited.

On our last cruise we went to David Bray’s Nautical Nostalgia talks, and saw a painting of his of the “Marco Polo” at Tilbury. We really liked the style and attention to detail, and decided to buy it as a memento of our trips. However, when we got chatting to David and learnt that he did commissions, we asked him to paint the ship in Norway, as it is one of our favourite travel destinations. We suggested the Lofoten Islands but left the details to David rather than imposing our own ideas on the picture.

We do not usually buy much in the way of souvenirs, but this one was well worth it and will bring back happy holiday memories for many years to come. 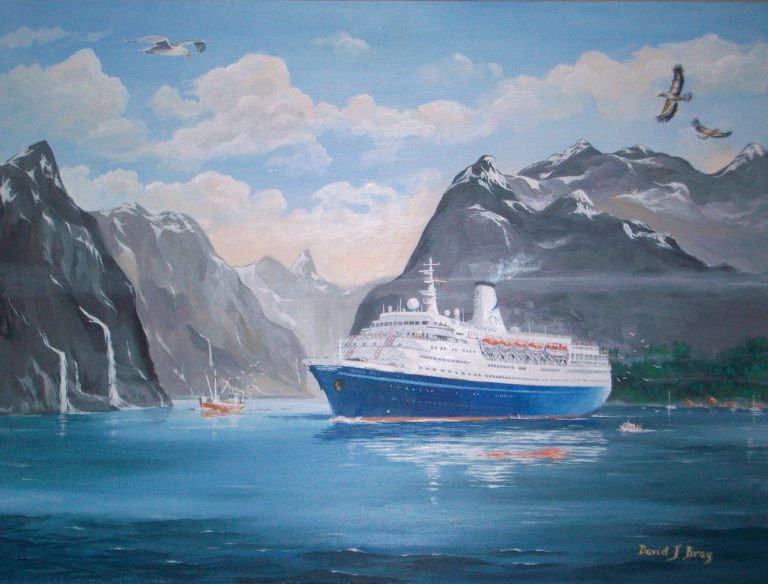 “On the 26th June 2010 the M.V. “Discovery” as part of her Round Britain Cruise paid her first visit to the Port of Liverpool.

Onboard, maritime historian and marine artist Captain David Bray captured this magic moment by painting a most magnificent picture capturing all the present and past historic moments and vibrancy of the River Mersey.

The days have long since gone when two or three trans-Atlantic liners berthed daily at the Pier Head, although today’s modern cruise liners have started to return to the recently opened Liverpool cruise terminal.

David Bray’s painting of a classic vessel returning to the River Mersey flying all the Company house flags of the former shipping companies based in Liverpool, appropriately ‘Discovery’ rekindles the memories of days gone by as she approaches the new cruise terminal. The former headquarters and offices of all these major companies namely the Royal Liver and Cunard Building together with the Mersey Docks and Harbour Company building continue to grace the Liverpool waterfront.

This picture is surely a must for any collector of Nautical History.” 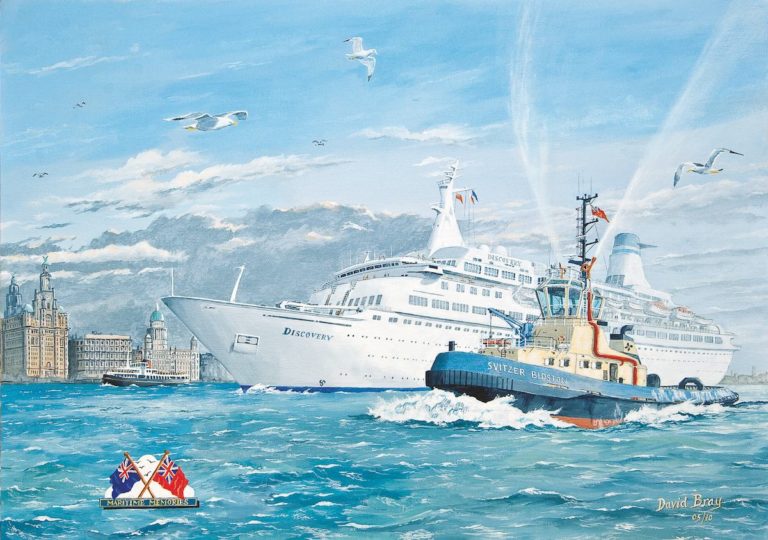 “There comes a time in a long marriage when there seems to be no answer to the question, ‘what can I give my beloved for his birthday?’ It was a few weeks before Michael’s birthday that I saw, and greatly admired, some of David Bray’s ship paintings.

Now for years I have lived with the fading black and white photographs of some of the ships Michael served aboard, so one day I asked which ship had the happiest memories for him. Straightway he nominated P&O’s “Carthage” on which he used to run out to Hong Kong. I contacted David and told him what I wanted. When the painting arrived in time for the birthday Michael was bowled over with delight.

The painting has pride of place in our sitting room and we both enjoy it but Michael confided the other day that every time he looks at it, it reminds him of the happy days of his youth and makes him feel quite young again.

So ladies, if you are looking for that extra special present that is full of very personal memories for your other half, I can’t recommend too highly one of David’s maritime paintings”. 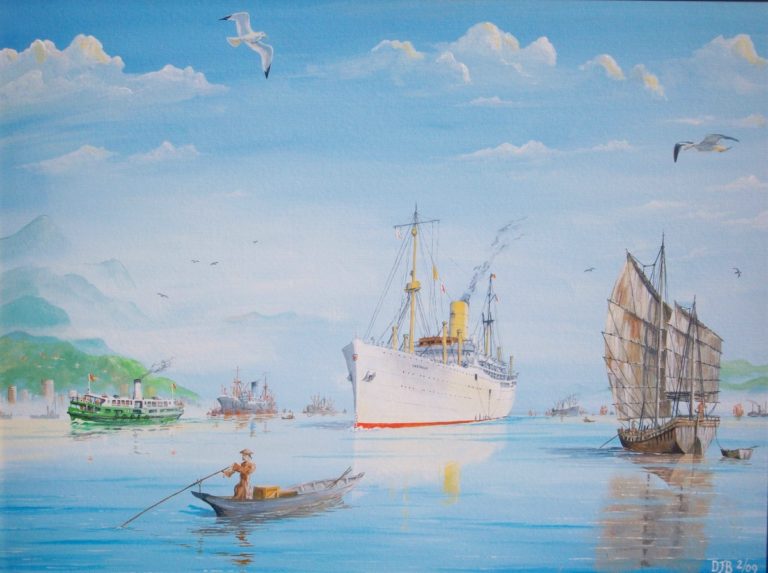 As a small boy from the fishing town of Whitby one of my memories was to go with Mother, prior to Remembrance Sunday and place a poppy in the wreath at the bottom of Golden Lion Bank.

The wreath would be taken out to sea by the lifeboat and placed offshore in memory of those men and boys from the town, lost at sea during the two World Wars.

It was then when I was told that our poppy was in memory of one of my Mother’s elder brothers, Terry, who was lost at Sea as a 17 year old cabin boy on the SS “Larpool”, part of Convoy ON-27, sunk by U-boat-208, on the 2nd November 1941 in the North Atlantic.

Eventually it became my duty to fulfil the obligation, “Lest we forget”, every November 11th, I place a poppy in our local church or beach to remember Terry, a duty that will eventually be passed on to my children.

By fate of chance I came across some of David’s paintings and decided that I would commission a picture of the, ”SS Larpool” to become a part of family heritage so that the younger generations of my family would appreciate the sacrifice of the fallen and take that memory forward.

The, SS “Larpool” takes pride of place in our home along side a faded photograph of a 17 year old Terry, proudly sporting his Merchant Navy badge in his lapel.

My children and grandchildren are aware of its significance as part of our family history.

It will be passed down the line for future generations.

I can give no higher recommendation to David for his effort in the painting, giving me the chance to honour the memory of an Uncle that I never met, who like many other gave his all. 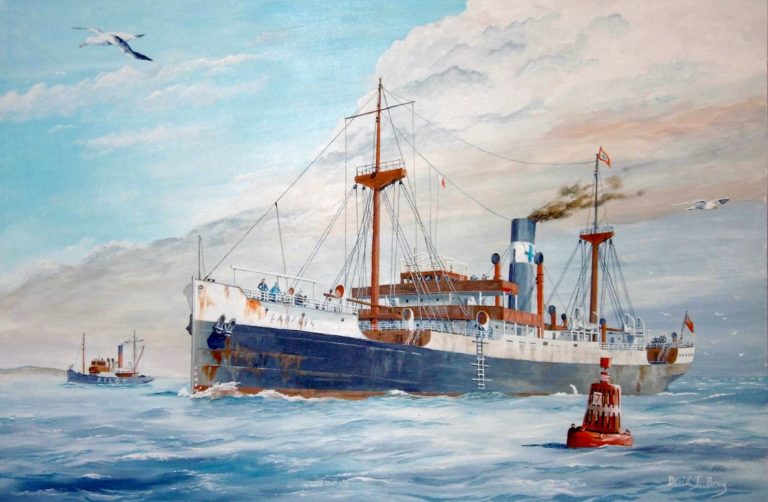