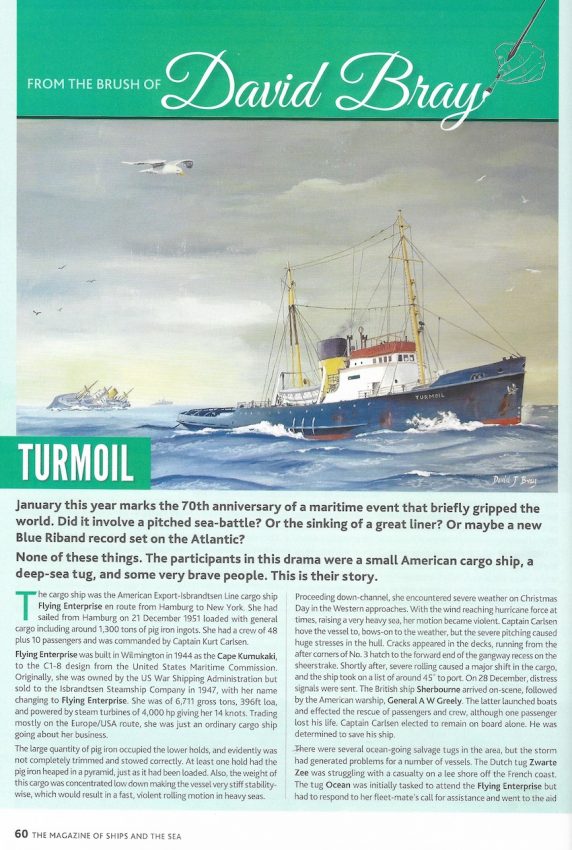 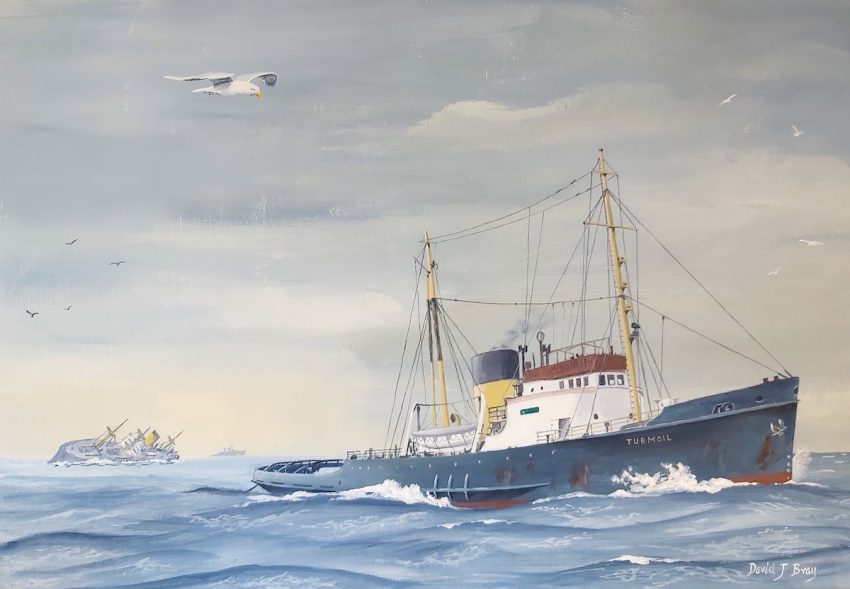 January this year marks the 70th anniversary of a maritime event that briefly gripped the world. Did it involve a pitched sea-battle? Or the sinking of a great liner? Or maybe a new Blue Riband record set on the Atlantic?

None of these things. The participants in this drama were a small American cargo ship, a deep-sea tug, and some very brave people. This is their story.

The cargo ship was the American Export-Isbrandtsen Line cargo ship “Flying Enterprise” en-route from Hamburg to New York. She had sailed from Hamburg on 21st December 1951 loaded with general cargo including around 1,300 tons of pig iron ingots. She had a crew of 48 plus 10 passengers, and was commanded by Captain Kurt Carlsen.

“Flying Enterprise” was built in Wilmington in 1944 as the “Cape Kumukaki”, to the C1-8 design from the United States Maritime Commission. Originally she was owned by the US War Shipping Administration but sold to the Isbrandtsen company in 1947, with her name changing to “Flying Enterprise”. She was of 6,711 gross tons, 396ft loa, and powered by steam turbines of 4,000 hp giving her 14 knots. Trading mostly on the Europe/USA route she was just an ordinary cargo ship going about her business.

The large quantity of pig iron occupied the lower holds, and evidently was not completely trimmed and stowed correctly. At least one hold had the pig iron heaped in a pyramid, just as it had been loaded. Also, the weight of this cargo was concentrated low down making the vessel very “stiff” stability-wise, which would result in a fast, violent rolling motion in heavy seas.

Proceeding down-channel, she encountered severe weather on Christmas day in the Western approaches. With the wind reaching hurricane force at times, raising a very heavy sea, her motion became violent. Captain Carlsen hove the vessel to, bows-on to the weather. But the severe pitching caused huge stresses in the hull. Cracks appeared in the decks, running from the after corners of No 3 hatch to the forward end of the gangway recess on the sheerstrake. Shortly after, severe rolling caused a major shift in the cargo, and the ship took on a list of around 45˚ to port. On 28th December distress signals were sent. The British ship “Sherbourne” arrived on-scene, followed by the American warship “General A W Greely”. The latter launched boats and effected the rescue of passengers and crew, although one passenger lost his life. Captain Carlsen elected to remain on board alone. He was determined to save his ship.

There were several ocean-going salvage tugs in the area, but the storm had generated problems for a number of vessels. The Dutch tug “Zwarte Zee” was struggling with a casualty on a lee shore off the French coast. The tug “Oceaan” was initially tasked to attend the “Flying Enterprise” but had to respond to her fleet-mate’s call for assistance, and went to the aid of the “Zwarte Zee”. The British tug “Turmoil” was in the area but she was engaged towing the disabled tanker “Mactra” towards Falmouth. Finally anchoring “Mactra” in Falmouth harbour, the “Turmoil” was tasked to attend the “Flying Enterprise”, sailing from Falmouth on 2nd January 1952.

Meanwhile, the US destroyer “John W Weeks” was standing-by the “Flying Enterprise” managing to pass hot food and drinks to Captain Carlsen. “Flying Enterprise” was, of course, totally “dead ship” with no power, propulsion, steering or heating. She was now listing 55˚ to 60˚ and rolling heavily.

“Turmoil” arrived on-scene on January 4th, and her Captain, Daniel Parker, weighed up the task of passing a tow. Under more favourable circumstances this would not be a problem. A rocket-line is fired across the casualty, picked up by the crew, and taken in. The rocket line draws a heavier messenger which in turn carries the bight of a heavier warp. Once this warp is passed over the bitts, the tug is able to haul the towline over to the casualty, where it can be made fast. But Captain Carlsen was on his own, and working on a wet foc’sle tilted at a crazy angle, freezing cold and soaking wet. He was physically unable to secure the towline. Five attempts were made to pass the messenger, each time the line was whipped away. Another pair of hands was needed, and badly!

Once aboard, Dancy was able to assist Carlsen to connect the tow. Then, on January 5th at 1005 commenced the long uncomfortable slog toward Falmouth. The towline was 350 fathom of 5½” wire with 150 fathom of 5” towing pendant. The weather had eased, and it was hoped the vessel would soon be in a place of safety. Still escorted by the “Weeks”, tug and tow made slow progress to the North. With no steering and a 60˚ list, the behaviour of the casualty was, as might be expected, erratic. “Flying Enterprise” wanted to go anywhere other than follow the tug. Wide sheers to port and starboard were experienced, each sheer putting heavy loads on the towline and slowing progress to a crawl.

Over the next four days slow progress was made, with the list continuing to increase and the vessel motion progressively becoming more sluggish. It was obvious that she was making water, and it was a race against time and the elements. The weather, initially fine, deteriorated until at 0130 on January 9th the tow parted. They had made around 250 miles towards Falmouth, but there was still around 40 miles to go.

By this time the world’s press had got wind of the drama taking place in the Western approaches. Suddenly Falmouth was full to the gunnels with reporters and newsmen. “Turmoil” and “Flying Enterprise” were front-page news in every newspaper, and the world, it seemed, was willing the ships to a triumphant arrival in Falmouth.

But it was not to be. Deteriorating weather precluded any attempt to reconnect the tow, and the ship’s list continued to increase. On January 10th at 1500, Carlsen and Dancy abandoned ship. The only “safe” way of doing this was from the funnel, now almost flat on the water. They jumped into the sea, and Parker very quickly moved “Turmoil” in to pick them up. According to the log entries, they were in the water for only nine minutes. As “Turmoil” headed for Falmouth, “Flying Enterprise” sank about half-an-hour later. Standing by on-scene were the US warship “Willard Keith” and the French tug “Abeille 25”.

On arrival in Falmouth they found themselves in the midst of a media frenzy. Carlsen, Parker and Dancy were national heroes. A week before they had been mere merchant seamen!

The salvage was, of course, a failure. The arrangement was on Lloyds Salvage agreement or “Lloyds Open Form” which states on the top “No Cure No Pay”. So no huge payouts to tugmen for the operation. Just their normal contract wages. Such ever is salvage work. Nevertheless, the owners made payments in recognition of the extraordinary efforts made to save the ship. £750 to Captain Parker, £500 to First Mate Dancy, and £1,250 split among the remainder of the crew (multiply by about twenty for today’s values).

“Turmoil” was an Admiralty Rescue tug; one of a group of eight built by the Henry Robb shipyard at Leith during World War II. This was the “Bustler” class. The intention was that these tugs would accompany Atlantic convoys, taking up a rearmost position in the formation. If a convoy vessel was torpedoed or otherwise disabled, the rescue tug would be able to put a line on board and bring it to port. The alternative was to sink the casualty by gunfire, to avoid it becoming a hazard to navigation. A number of vessels were brought safely to port by these tugs, saving lives, valuable cargos and priceless ships.

“Turmoil” was 1,100 gross tons, 190 feet loa, and entered service in July 1945. She was powered by two eight-cylinder Polar diesels, producing 4,000 BHP to a single screw for 16 knots free-running. Originally, she was armed with a 3” gun and a 2-pounder AA. From 1948 she was operated by the Overseas Towage and Salvage company. Her callsign was GMWK. After the “Flying Enterprise” incident, she continued in the contract towage and salvage business, completing many ocean tows. One notable one was the salvage of the stern half of the 20,000 ton Niarchos tanker “World Concord” which had broken in two during severe weather in the Irish Sea in November 1954. A particularly taxing task. The stern half of the tanker was unmanned, and had to be boarded in foul weather conditions. The subsequent tow was fraught with difficulties, but they eventually reached Holy Loch. Later, “Turmoil” was engaged on a contract to tow the stern half of the tanker to Antwerp. This passage was equally as fraught as the original rescue job, but eventually the two sections of the “World Concord” were reunited, and the vessel resumed trading.

Captain Kurt Carlsen was Danish-born and went to sea at 14. After the “Flying Enterprise” incident he received Lloyds Silver medal for Meritorious Service and the US Merchant Marine Distinguished Service Award. He was welcomed back to New York on January 17th to a ticker-tape parade, and took command of another vessel in the Isbrandtsen fleet named the “Flying Enterprise II”. He died in 1989 aged 75.

Captain Parker continued in command of the “Turmoil” until 1955 when he was severely injured in a fall on board. The ship was transiting the Dover Straits. He was taken ashore by launch, but died just as it berthed in Dover.

Kenneth Dancy received the Order of Industrial Heroism. He died in 2013 aged 88.

My painting portrays “Turmoil” towing the “Flying Enterprise”, with the latter taking a huge sheer to starboard. In the distance the USS “John W Weeks” is standing by.