Sirdhana on the Hooghly River 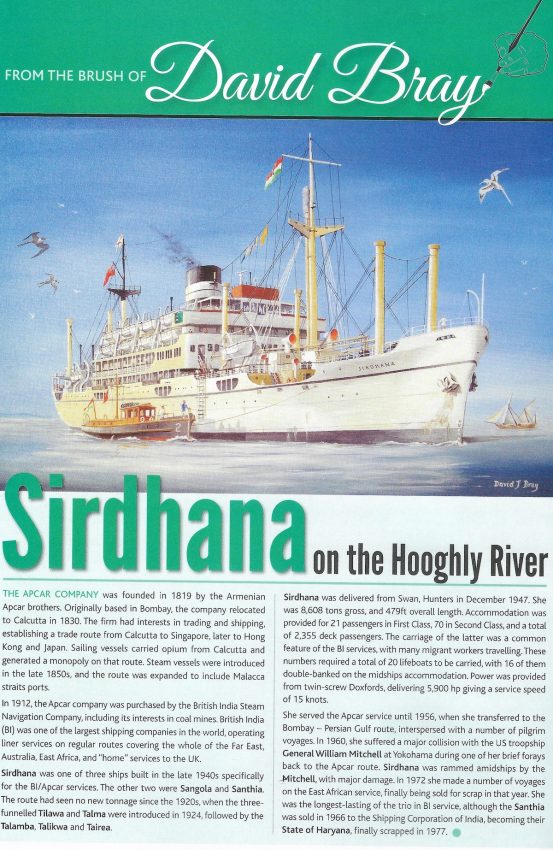 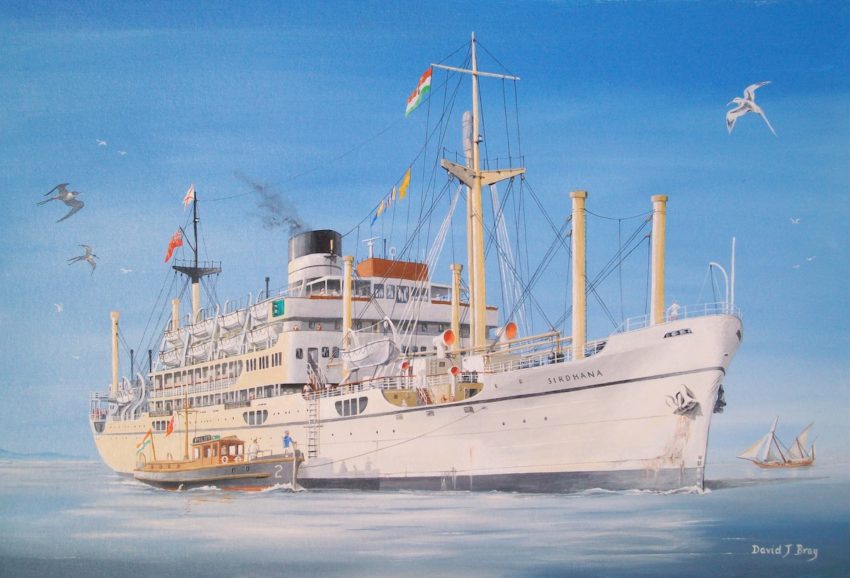 The Apcar company was founded in 1819 by the Armenian Apcar brothers. Originally based in Bombay, the company relocated to Calcutta in 1830. The firm had interests in trading and shipping, establishing a trade route from Calcutta to Singapore, later to Hong Kong and Japan. Sailing vessels carried opium from Calcutta and generated a monopoly on that route. Steam vessels were introduced in the late 1850s, and the route was expanded to include Malacca straits ports.

In 1912, the Apcar company was purchased by the British India Steam Navigation Company, including its interests in coal mines. British India (BI) was one of the largest shipping companies in the world, operating liner services on regular routes covering the whole of the Far East, Australia, East Africa, and “home” services to the UK.

“Sirdhana” was one of three ships built in the late 1940s specifically for the BI/Apcar services. The other two were “Sangola” and “Santhia”. The route had seen no new tonnage since the 1920s, when the three-funnelled “Tilawa” and “Talma” were introduced in 1924, followed by the “Talamba”, “Talikwa” and “Tairea”.

“Sirdhana” was delivered from Swan, Hunter’s in December 1947. She was 8,608 tons gross, and 479ft overall length. Accommodation was provided for 21 passengers in First Class, 70 in Second Class, and a total of 2,355 deck passengers. The carriage of the latter was a common feature of the BI services, with many migrant workers travelling. These numbers required a total of 20 lifeboats to be carried, with 16 of them double-banked on the midships accommodation. Power was provided from twin-screw Doxfords, delivering 5,900 hp giving a service speed of 15 knots.

She served the Apcar service until 1956, when she transferred to the Bombay – Persian Gulf route, interspersed with a number of pilgrim voyages. In 1960 she suffered a major collision with the US troopship “General William Mitchell” at Yokohama during one of her brief forays back to the Apcar route. “Sirdhana” was rammed amidships by the “Mitchell”, with major damage. In 1972 she made a number of voyages on the East African service, finally being sold for scrap in that year. She was the longest-lasting of the trio in BI service, although the “Santhia” was sold in 1966 to the Shipping Corporation of India, becoming their “State of Haryana”, finally scrapped in 1977.