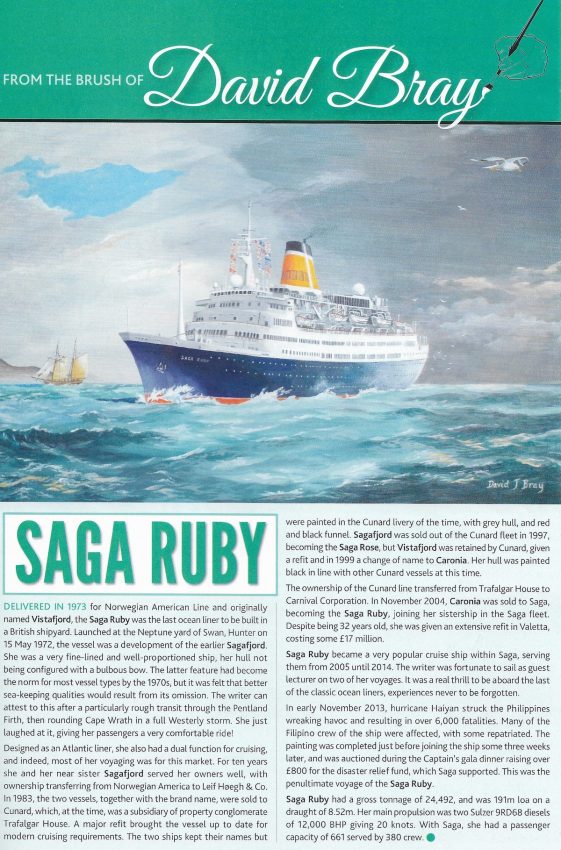 Delivered in 1973 for Norwegian American Line, and originally named “Vistafjord”, the “Saga Ruby” was the last ocean liner to be built in a British shipyard. Launched at the Neptune yard of Swan, Hunter on 15th May 1972, the vessel was a development of the earlier “Sagafjord”. She was a very fine-lined and well-proportioned ship, her hull not being configured with a bulbous bow. The latter feature had become the norm for most vessel types by the 1970s but it was felt that better sea-keeping qualities would result from its omission. The writer can attest to this after a particularly rough transit through the Pentland Firth, then rounding Cape Wrath in a full Westerly storm. She just laughed at it, giving her passengers a very comfortable ride!

Designed as an Atlantic liner, she also had a dual function for cruising, and indeed, most of her voyaging was for this market. For ten years she and her near sister “Sagafjord” served her owners well, with ownership transferring from Norwegian America to Leif Høegh & Co. In 1983 the two vessels together with the brand name were sold to Cunard, which at the time was a subsidiary of property conglomerate Trafalgar House. A major refit brought the vessel up-to-date for modern cruising requirements. The two ships kept their names but were painted in the Cunard livery of the time, with grey hull, and red and black funnel. “Sagafjord” was sold out of the Cunard fleet in 1997, becoming the “Saga Rose” but “Vistafjord” was retained by Cunard, given a refit and in 1999 a change of name to “Caronia”. Her hull was painted black in line with other Cunard vessels at this time.

The ownership of the Cunard line transferred from Trafalgar House to Carnival Corporation. In November 2004 “Caronia” was sold to Saga, becoming the “Saga Ruby”, joining her sistership in the Saga fleet. Despite being 32 years old, she was given an extensive refit in Valetta, costing some £17 million.

“Saga Ruby” became a very popular cruise ship within Saga, serving them from 2005 until 2014. The writer was fortunate to sail as guest lecturer on two of her voyages. It was a real thrill to be aboard the last of the classic ocean liners, experiences never to be forgotten.

In early November 2013 hurricane “Haiyan” struck the Philippines wreaking havoc and resulting in over 6,000 fatalities. Many of the Filipino crew of the ship were affected, with some repatriated. The painting was completed just before joining the ship some three weeks later, and was auctioned during the Captain’s gala dinner raising some £400 for the disaster relief fund, which Saga supported. This was the penultimate voyage of the “Saga Ruby”.