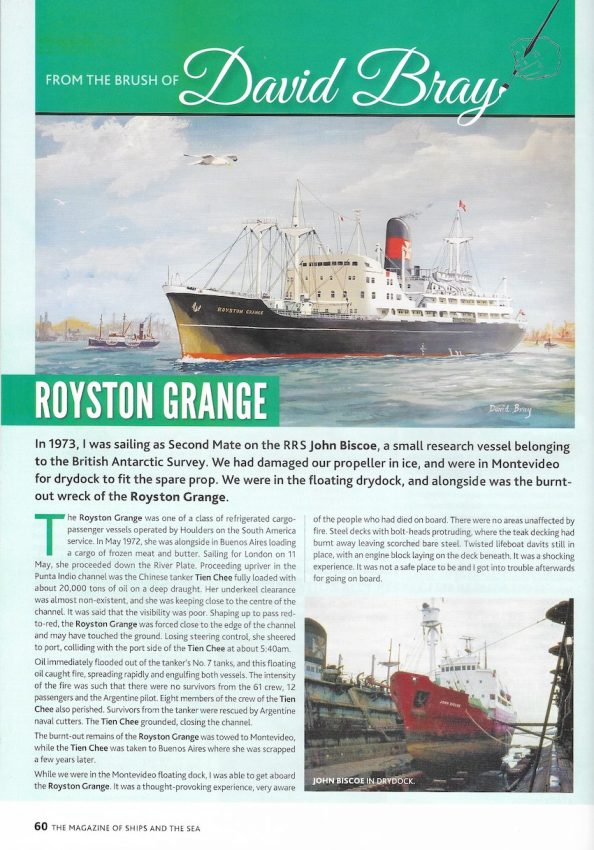 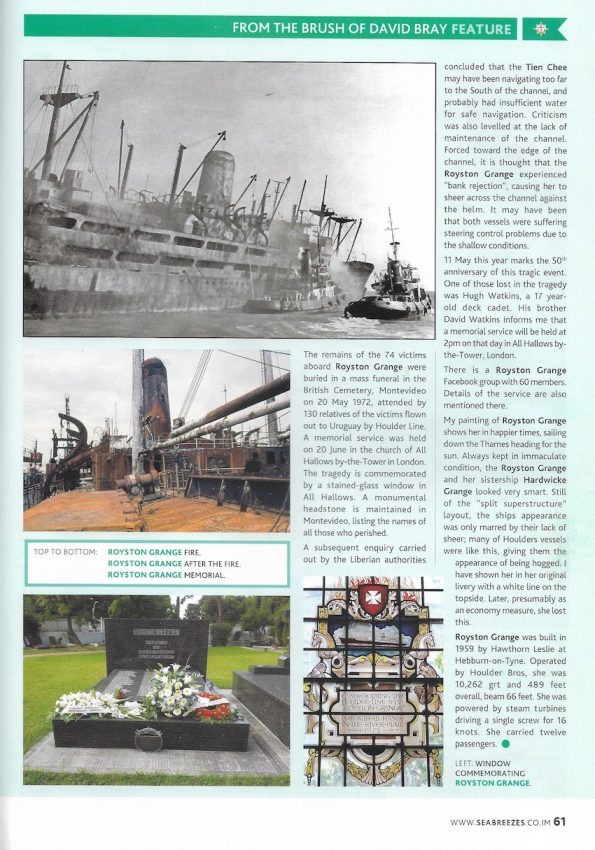 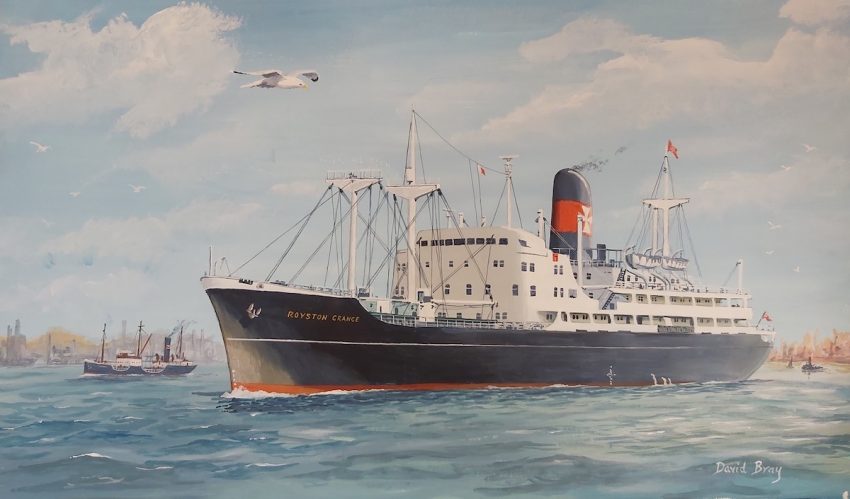 In 1973 I was sailing as Second Mate on the RRS “John Biscoe”, a small research vessel belonging to the British Antarctic Survey. We had damaged our propeller in ice, and were in Montevideo for drydock to fit the spare prop. We were in the floating drydock, and alongside was the burnt-out wreck of the “Royston Grange”.

The “Royston Grange” was one of a class of refrigerated cargo-passenger vessels operated by Houlders on the South America service. In May 1972 she was alongside in Buenos Aires loading a cargo of frozen meat and butter. Sailing for London on 11th May she proceeded down the River Plate. Proceeding upriver in the Punta Indio channel was the Chinese tanker “Tien Chee” fully loaded with about 20,000 tons of oil on a deep draught. Her underkeel clearance was almost nonexistent, and she was keeping close to the centre of the channel. It was said that the visibility was poor. Shaping up to pass red-to-red, the “Royston Grange” was forced close to the edge of the channel and may have touched the ground. Losing steering control, she sheered to port, colliding with the port side of the “Tien Chee” at about 5.40am.

Oil immediately flooded out of the tanker’s No.7 tanks, and this floating oil caught fire, spreading rapidly and engulfing both vessels. The intensity of the fire was such that there were no survivors from the 61 crew, 12 passengers and the Argentine pilot. Eight members of the crew of the “Tien Chee” also perished. Survivors from the tanker were rescued by Argentine naval cutters. The “Tien Chee” grounded, closing the channel.

The burnt-out remains of the “Royston Grange” was towed to Montevideo, while the “Tien Chee” was taken to Buenos Aires where she was scrapped a few years later.

While we were in the Montevideo floating dock, I was able to get aboard the “Royston Grange”. It was a thought-provoking experience, very aware of the people who had died on board. There were no areas unaffected by fire. Steel decks with bolt-heads protruding, where the teak decking had burnt away leaving scorched bare steel. Twisted lifeboat davits still in place, with an engine block laying on the deck beneath. It was a shocking experience. It was not a safe place to be and I got into trouble afterwards for going on board.

The remains of the 74 victims aboard “Royston Grange” were buried in a mass funeral in the British Cemetery, Montevideo on 20th May 1972, attended by 130 relatives of the victims flown out to Uruguay by Houlder Line. A memorial service was held on 20th June in the church of All Hallows by-the-Tower in London. The tragedy is commemorated by a stained-glass window in All Hallows. A monumental headstone is maintained in Montevideo, listing the names of all those who perished.

A subsequent enquiry carried out by the Liberian authorities concluded that the “Tien Chee” may have been navigating too far to the South of the channel, and probably had insufficient water for safe navigation. Criticism was also levelled at the lack of maintenance of the channel. Forced toward the edge of the channel, it is thought that the “Royston Grange” experienced “bank rejection”, causing her to sheer across the channel against the helm. It may have been that both vessels were suffering steering control problems due to the shallow conditions.

11th May this year marks the 50th anniversary of this tragic event. One of those lost in the tragedy was Hugh Watkins, a 17 year-old deck cadet. His brother David Watkins informs me that a memorial service will be held at 2pm on that day in All Hallows by-the-Tower, London

There is a ‘Royston Grange’ Facebook group with 60 members. Details of the service are also mentioned there.

My painting of “Royston Grange” shows her in happier times, sailing down the Thames heading for the sun. Always kept in immaculate condition, the “Royston Grange” and her sistership “Hardwicke Grange” looked very smart. Still of the “split superstructure” layout, the ships appearance was only marred by their lack of sheer; many of Houlders vessels were like this, giving them the appearance of being hogged. I have shown her in her original livery with a white line on the topside. Later, presumably as an economy measure, she lost this.

“Royston Grange” was built in 1959 by Hawthorn Leslie at Hebburn-on-Tyne. Operated by Houlder Bros. she was 10,262 grt and 489 feet overall, beam 66 feet. She was powered by steam turbines driving a single screw for 16 knots. She carried twelve passengers.