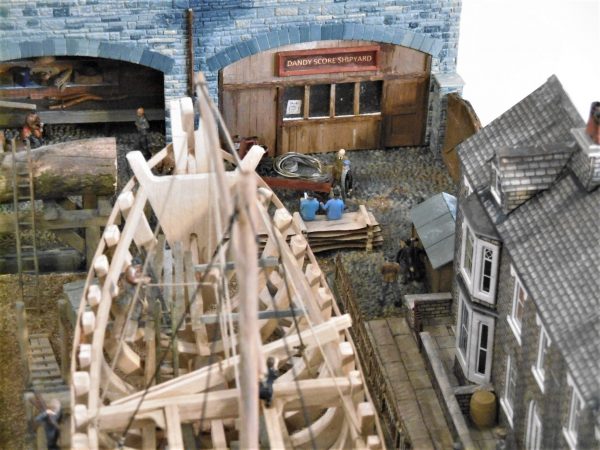 To scroll through the gallery of larger photos, see the Gallery section at the bottom of the page.

Having built many scale model ships over the years, a new project beckoned. Last year I completed the Norwegian Jekt “Gjøa” in a slipway setting and this spurred me on to something more challenging.

I decided upon a shipyard diorama at 1:72 scale. A reasonably compact model would result, about 2 feet square, (excuse the imperial measurements, a meter is something you put a shilling in when the light goes out!).

Two slipways would accommodate a small coastal schooner under construction, in frame, and a fishing smack stemmed for repairs. Period would be around 1900.

The benefit of using this scale, is that it is common with 00/H0 scale model railways. Thus I could access a plethora of supplies from our local model railway store; Parr’s, run by the very helpful and knowledgeable Anna.

I needed two vessels each about 12″ in length. The first was to be a small coastal schooner, in frame. This would be scratch-built from drawings. My venerable and much-thumbed copy of Underhill’s “Plank-on-frame models”, on my bookshelf for over 40 years, yielded hull lines for “Leon”, a brigantine built in Larvik in 1880. This was the type of vessel I wanted, but was too large.

Having scanned the lines views, I compressed the length to give the proportions of a smaller vessel. Profiles of keel, stem and stern were taken, and frame spaces marked. Paper profiles were cut for each station, or frame. Using limewood, frames were built up from individual futtocks.

Mounted on the keel and carefully faired, a very pleasing representation was created of a vessel under construction. Some stringers, deck beams, knees and other structure was added. The completed unit was mounted on keel block stools, each built from 6mm square stripwood suitably weathered. This assembly was set aside while I made a start on the second vessel. This was to be a fishing smack hauled out on a steel trolley. The basis of this was a Billings kit; the sailing Tunnyman “Marie Jeanne”.

This would be displayed with hull and deck repairs in progress, otherwise in quite a careworn state. Construction of this kit was quite straightforward. The deck layout and rigging was re-worked making her a conventional sketch-rigged smack. Some internal structure needed to be shown, as some deck and hull planking was “removed”. False deck beams and hull timbers (frames) were fitted in way of the missing planks. An internal flat or deck was built, since the hatch covers would be removed allowing sight into the fish rooms.

The hull was painted in a heavily weathered style, except for part of the hull, which has fresh antifouling applied. Masts were rigged, but topmast lowered and bowsprit rigged inboard. Sails are absent, being “under repair in the yard sail loft”. Lots of rigging and clutter lying around the deck; no ship looks her best in a repair yard.

A slipping trolley was constructed from Plastruct sections, mostly “H” girder, fitted with six tiny wheels. This completed unit was suitably painted (rust) and weathered, and the hull secured to it with 6BA screws. In all my static models I securely fasten 6BA nuts into the keel structure, inside the hull, with holes carefully drilled up from beneath. This is done before planking and gives a secure hull fastening from below. The hull was secured onto the trolley, with a slight starboard list such that she leans on the trolley support posts on that side.

I then turned my attention to the shipyard in which these two vessels were to be displayed. An offcut of 6mm MDF was picked up from my local timber dealer. Approx 22″ square, this would be cut into two sections. One, the “hard” containing the two slipways would slope from ground level at the water end, up to about 1½” at the shore end. There it meets a level section at the top of the slipways, which contains workshops and a saw pit. The level section extends down the right side of the yard, adjacent the slipways, where a row of workmen’s cottages are located.

An excellent guide to shipyard practice in this era is “The Evolution of the Wooden Ship” by Greenhill and Manning (pub Batsford, 1988). Sam Manning is an expert boatbuilder and artist, and has provided many excellent sketches showing every stage in the construction of wooden coastal craft. Recent perusal of this work provided the impetus for this project. Many small cameos of shipyard activity illustrated by Manning have been included.

Having completed the base structure and the two hulls, it was time to move my construction indoors. Up until this point, in Oct 2019, construction took place in my garage workshop, but the onset of the colder weather led me to set up on the breakfast bar in the kitchen. Wife Mary doesn’t mind one little bit, and supply of tea and biscuits more reliable! I’ve always maintained that every kitchen can be improved by the addition of a shipyard! Several model ships have been built here.

A visit to Parrs model shop yielded some useful kits for incorporation into the model. Plastic kit makers Wills provided a set of four railway arches, exactly the same width as the base (by complete chance). These arches would provide four spaces, one would be “the horfice”, others would be workshops and store space. Another Wills kit built into a timber store. A row of terraced cottages was built in low-relief from a Metcalfe card kit.

The yard is called the Dandy Score Shipyard, and is completely imaginary. The “dandy score” is an iron fitting located on the aft corner of the bulwark rail of a sailing trawler. It is a fairlead through which the trawl warp runs. I just liked the name! In this town (Lowestoft) many narrow pathways run from the town down to the beach (or “the grit” as local fishermen used to call it. These pathways are known as “scores”, while in my native Great Yarmouth, similar pathways are known as “the Rows”.

The model shop came up trumps on many occasions, with scatter materials, plastic moulded stone walling and cobblestone, and people! Acrylic paints were used to age and weather many elements.

A variety of activities is in progress on the yard. Timber is being steamed in a steam-box supplied by a wood-burning stone-built boiler. One of the arches is the boatbuilding shed, in which a wooden dinghy is under construction. The rudder of the smack has been unshipped, and is set up on a trestle under the stern, with two shipwrights making repairs. On deck a workbench has been set up for some deck repairs. Shipwrights and crew converse. The smack has a female Skipper; an early example of inclusion! Her pet collie; the ship’s dog, sits on the bowsprit. Some very dodgy scaffolding (no elfin safety then!) is erected on the starboard bow, where hull planking is being renewed. Some new timber planking has been fitted, and framing shows through the gaps where new strakes are to be fitted. The schooner also has scaffolding erected, together with a gangway for access.

On the hard, between the two vessels, a new topmast is being fashioned from square lumber. Aboard the schooner in-frame, a temporary mast and derrick has been rigged for general lift-and-shift. A sling of timber is being lowered into the forepart.

At the top of the slipway is located a saw-pit. A large log is being ripped into planks by top and bottom sawyer. The “log” is gratis beech tree in my garden! A stack of sawn planks is in stick, and a pile of sawn knees and “wrongs” is nearby. A couple of yard hands are sitting on the stack with their newspaper and lunchboxes. A horse drawn cart is delivering supplies of rope etc. Above all, on the track above the arches, a farmer is walking some cows to new pastures. One of the cows has decided she’s gone far enough, and the farmer’s son is trying to chivvy her along!

A paling fence divides the hard from the terrace of houses. The Metcalfe card kit was most interesting to construct, and built up into a superb row of houses complete with garden gates and curtains at the windows. This is a low-relief kit, normally found at the back of a railway layout. Works a treat in this diorama. A small area on the river-side of the houses is grassed, with a tree, and a bench seat with a group of people enjoying the sunshine and view.

Another scene has a wooden boat at the bottom of the slipway, with a group of youngsters chatting, including two girls. Probably more 1950s than 1900 but fun anyway.

One possible criticism would be that a yard of this size would never have had so many workers. I’m sure that’s the case, so I’m claiming “artist’s licence”. A diorama like this attracts attention, and friends spend time looking for all the activities and detail present. This doesn’t happen with a normal ship model, which often gains no more than ten seconds perusal. Dandy Score was fun to build, took me into new areas of model-making, and provided me with plenty to do whilst being under covid curfew.

Click on an image to see the large version and scroll through the gallery.