In November 2014 I had a speaking appointment aboard Queen Mary 2. Very pleased finally to get to lecture on board this magnificent vessel. It was to be a short cruise, Southampton to Hamburg and Oslo.

Delayed sailing from Southampton because of a failed Azimuth motor in one of the pods, we finally left the port around midnight. The passage up the Elbe was completed in darkness, and by breakfast time we were all secure alongside at Hamburg. That evening we sailed at about 6pm, again in darkness, but I was out on the promenade deck to “see her out”. Suddenly I heard something that took me back 47 years……..

In 1967 I was cadet with Ellerman Lines, completing a Mid Apprenticeship Release course at the School of Navigation, Warsash. In those days, large liners were commonplace. There was always something interesting to see on Southampton Water.

Queen Mary as she sailed from Southampton on 21st October 1969

But we were saddened to hear that the Queen Mary was to leave Southampton, and the UK for the last time. On the 31st October 1967 I was on the beach watching her final departure. Many small craft accompanied her on her way down Southampton Water. As she came abeam of Fawley Oil jetties, one of the moored tankers gave her three long blasts. The “Queen” replied. That magnificent whistle was the most distinctive ever fitted in a ship in my opinion. I was 18. I didn’t expect ever to hear that again.

But I was wrong. 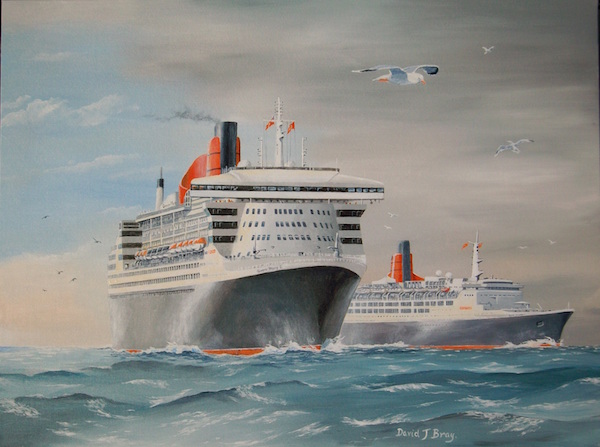 Nostalgia for me, maybe. But it was quite a moment when I heard that whistle saluting the port of Hamburg last November.