It was 1970. I was 2nd Mate in a cargo ship, the “City of Canberra”, sailing on the MANZ line route between the East coast of the USA and Canada, and Australia. This was one of the many “cross trades” operated by British liner companies in those days. Trading between foreign countries, these ships rarely came to the UK. MANZ stood for Montreal Australia New Zealand Direct, and it was a shipping company in it’s own right, but chartered ships instead of owning their own vessels. Ellerman Lines had a shareholding in MANZ, and often provided vessels for this route.

Loading general cargo in Montreal, New York, Boston, Philadelphia, Newport News and Savannah, then proceeding via the Panama canal to either New Zealand or Australia. On this voyage we were to visit Brisbane, Sydney, Melbourne, Adelaide and “Freo”. For the return voyage to the USA we would load general and refrigerated cargo. This ship had about one-third of her cargo spaces refrigerated, so she could load about 3,000 tons of meat and dairy products. 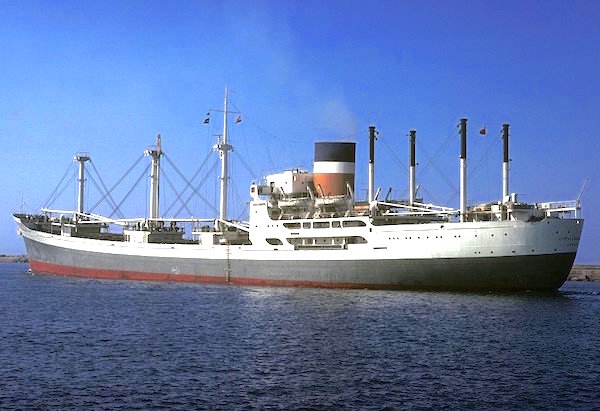 Arriving in Sydney, we were treated to a wonderful passage up the harbour in brilliant sunshine. Passing through the iconic harbour bridge, we proceeded to our berth at Glebe Island. Cargo discharge would start immediately we were alongside.

All secure in the berth, hatches open, derricks rigged, cargo unloading started, gangs of stevedores at each hold. As duty officer I was very busy, making sure no time was lost.

As I walked along the foredeck, I glanced down No 3 hold. Stevedores were working in the upper tweendeck, just below. One of them called up to me “hey, Mate, what was the first ship lost in World War 2”?

I replied “”Athenia”, why”? He didn’t say anything. I had much to do so hurried away.

Later that day, the stevedore foreman saw me and said “You’ve upset Joe”.

I asked who Joe was. He said, “the guy who asked you about the first ship sunk in WW2. Joe is a little bit simple, and has an obsession with World War 2. You’re the first person who’s correctly answered one of his questions. He hasn’t said anything since.”

A few days later, cargo discharge completed, we sailed from Sydney. Routine unberthing job. The Second Mate is in charge of unmooring at the stern, with six or seven seamen handling the mooring lines and tugs lines. Once clear of the berth and tugs let go, I went to the bridge. I arrived on the bridge just as we were approaching the Harbour bridge. Just at that moment we had a total power blackout. Main engine stopped, no electrical power, no steering. Dead! As it happened, the rudder was about eight degrees to Starboard when power was lost, and it was effectively jammed there. The ship had headway, about 6 knots, and the head slowly came round to Starboard. We were out of control, heading for the Opera House! Quickly, the tugs were recalled, and were made fast alongside, one each side amidships. They would then be best placed to control the ships movements in the absence of our own main engine and steering.

Judicious astern power from the tugs stopped the ship with the bow almost touching the shore in front of the Opera house. Shortly after that, power was restored, and we were able to straighten her up, and get underway again. Only one minor problem. The tugs were coal-fired, both belching black smoke. Their funnels were right beside the ship’s bridge, and the wheelhouse rapidly filled up with smoke! It just wasn’t our afternoon!

Ever since that event I’ve embellished the story a trifle, claiming that I’ve been in a ship that had a collision with the Sydney Opera House! Not many people can say that!

That was all more than 45 years ago. Different world, different times. But just occasionally one is reminded of exactly how much time has passed……..

Just before I retired, I ran a Dynamic Positioning course at my college at Lowestoft (what is Dynamic Positioning? – click here), one of many that I ran over a 25 year period. My students were all ships’ officers, from all over the world. Looking at the enrolment forms on the first morning I saw that one guys address was Glebe Island, Sydney. I said “I’ve been to Glebe Island”.

He replied “Oh you wouldn’t recognize the place. It’s all yuppie flats now. I live in one of them. No ships anymore, and all the container cranes have gone”.

I said “What container cranes”?

The container revolution had come and gone since I was there.

Just for a moment I felt very old!