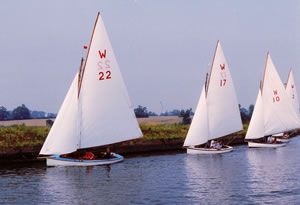 As might be expected, David has spent a large part of his life messing around in small boats. Aged 12 to 16 he spent several Easter holidays sailing with a group of schoolkids on the Norfolk Broads. These chilly weeks introduced him to small-boat sailing and to the wherry “Albion”. Joining the school’s sailing club, he was able to regularly sail a battered Enterprise dinghy on Breydon water.

In 1970 he had a Yachting World Dayboat built by Lewis Walker of Leigh-on-Sea. Fourteen feet long, of varnished mahogany with “barge tan” sails she was the apple of his eye. This boat gave David an enormous amount of fun sailing on the Broads and from Southwold. She was sold in 1983.

In 1984 David bought a Waveney One-Design, a 20ft half decked racing yacht of a type raced on Oulton Broad. With Mary as crew, David raced this boat (“Myrica”, W22) every weekend and Wednesday evening through the summer season. Although built in wood to a very traditional design, the Waveney is a challenging boat to sail, especially in a strong breeze. In about 1989 David bought the derelict sister boat “Autumn Crocus” (W23), spending the next two years rebuilding her with the assistance of retired shipwright, the late Harry Oldman. On completion, “Myrica” was sold and David raced “Autumn Crocus” with considerable success. This boat was sold in 2000. 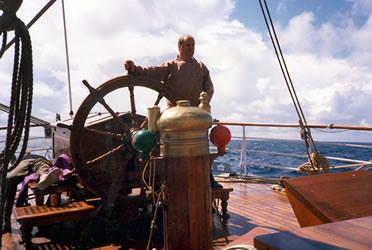 A different type of sailing: David has long held an interest in square-rigged sailing ships, and in 1988 was appointed to the Nautical Institute Sailing Ship qualifications committee.

As a result of the contacts made, David was able to join the Norwegian fullrigger “Sørlandet” for a voyage from Lowestoft to Norway in 1989. This was a magic experience for David; sailing a square rigger at night in a strong breeze is one of his fondest memories.“