In 2005 David saw advertised a “Maritime Memories” cruise in the cruise liner “Discovery”, aimed specifically at people interested in ships, or ex-seafarers. The voyage was organised by Des Cox in conjunction with the ship’s operators (Voyages of Discovery). Mary and David went along as fare-paying passengers (a bit of a wrench for David after a career in shipping) and, to cut a long story short, had a very enjoyable time. 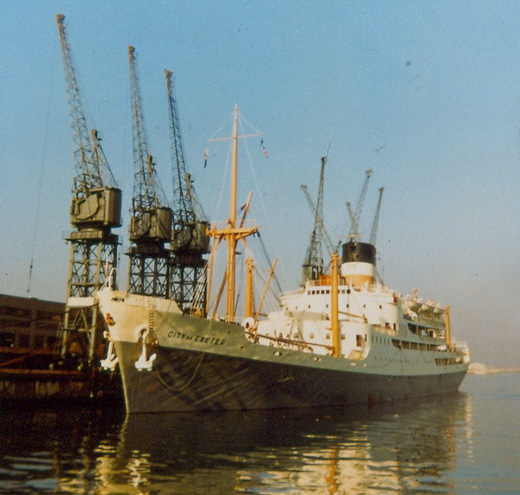 City of Exeter. One of the last of the Ellerman passenger liners.
I was Cadet for two voyages on this one..

Asked to give a lecture about Antarctica in the ship’s theatre, this introduced David to the business of cruise-ship lecturing. Mary and David have sailed on every Maritime Memories voyage ever since and have gained many great friends as a result. Typically there will be about 150 ex-seafarers on board, and they liven the ship considerably.

Des Cox, with his wife Ulla, run a company called Snowbow, which, in addition to organising the “Maritime Memories” voyages, collects and restores archive film of ships and marine subjects. He produces one-hour videos featuring different shipping companies or ports, marketed to the shipping fraternity. The catalogue now numbers about thirty films.

David is currently making a precise database of all these films such that individual ships can be identified.