David’s fascination with all things to do with ships and the sea began at an early age (about 5). Growing up in the port of Great Yarmouth he rapidly became very familiar with the variety of craft and vessels frequenting that small port. At that time there was a thriving seasonal herring fishing industry with dozens of drifters working from the port during November and December.

Annual holidays in London with his parents introduced David to the world of deep-sea shipping. Day trips on the Thames were full of variety and interest, with ships and craft in great profusion. The trip from Tower Pier to Southend in the “Royal Sovereign” gave David a taste for greater things. It is probably true that his career and interests were formed during these river voyages.

Another downriver voyage in those days was to Greenwich. Here, David discovered another world – that of the deep-sea sailing ship. To an impressionable 8-year old, the “Cutty Sark” was fantastic, and resulted in a lifelong interest in historic sailing ships. This was confirmed by a visit to the National Maritime Museum. 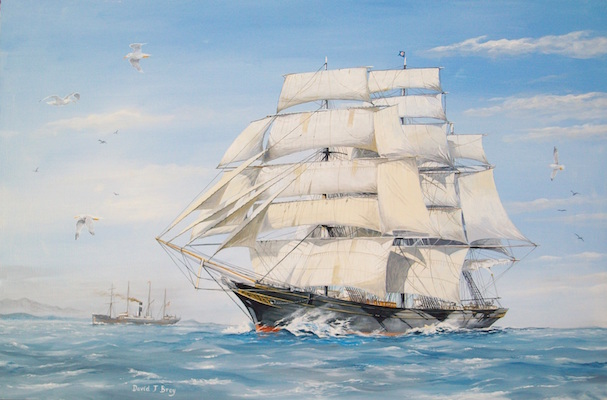 David’s painting of the Cutty Sark

In the intervening fifty or so years, David’s enthusiasm for all things to do with Maritime History has continued. He has read widely on every aspect of the subject, and has a very extensive library of “ship books” as his wife, Mary, calls them.

After a lifetime of involvement in the shipping industries, especially the Merchant Navy, David considers that it is a tragedy that not one example of a British ocean-going merchant ship has been preserved for posterity, (except the RMS “Queen Mary” – in California!), and that otherwise there is no reminder of this once huge industry.