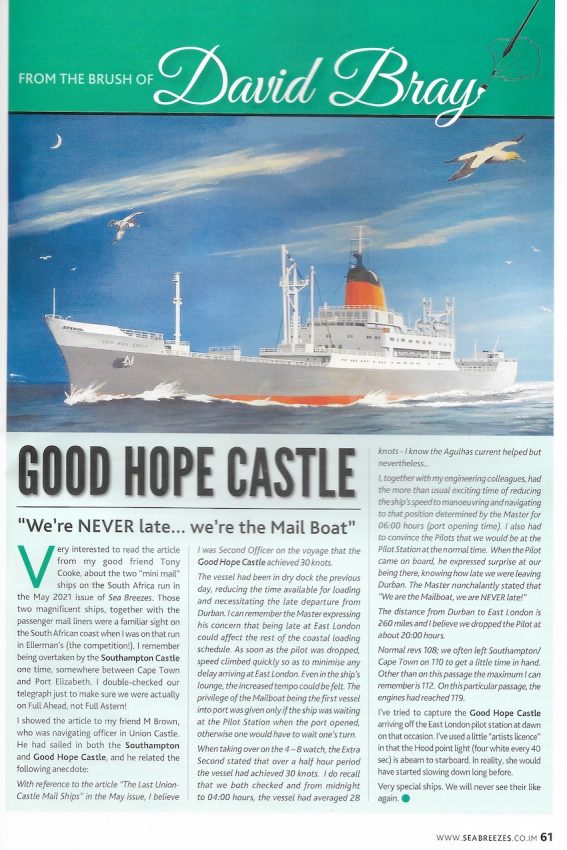 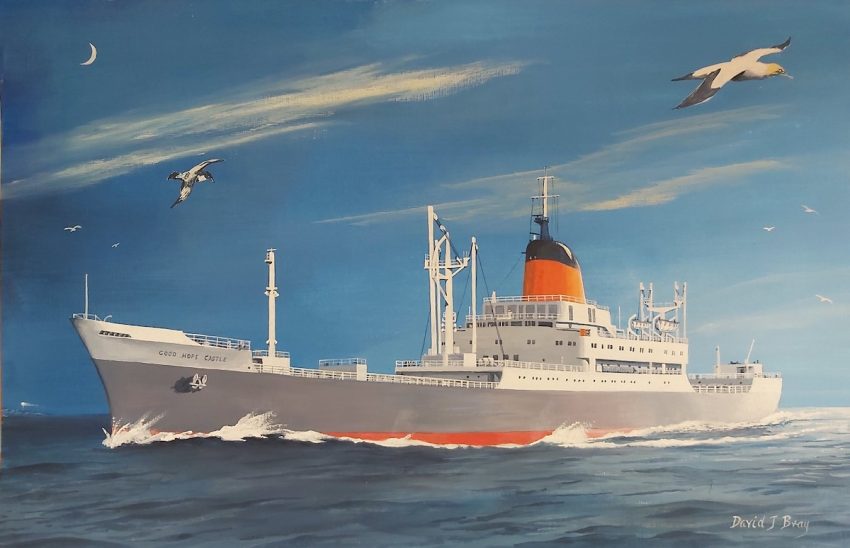 Very interested to read the article from my good friend Tony Cooke, about the two “mini mail” ships on the South Africa run. Those two magnificent ships, together with the passenger mail liners were a familiar sight on the SA coast when I was on that run in Ellerman’s (the competition!). I remember bring overtaken by the “Southampton Castle” one time, somewhere between Capetown and Port Elizabeth. I double-checked our telegraph just to make sure we were actually on Full Ahead, not Full Astern!

I showed the article to my friend M Brown, who was navigating officer in Union Castle. He had sailed in both the “Southampton” and ” Good Hope”, and he related the following anecdote:

With reference to the article “The Last Union-Castle Mail Ships” in the  May issue, I believe I was Second Officer on the voyage that the Good Hope Castle achieved 30 knots.

The vessel had been in dry dock the previous day, reducing the time available for loading and necessitating the late departure from Durban.  I can remember the Master expressing his concern that being late at East London could affect the rest of the coastal loading schedule.  As soon as the pilot was dropped, speed climbed quickly so as to minimise any delay arriving at East London.  Even in the ship’s lounge, the increased tempo could be felt. The privilege of the Mailboat being the first vessel into port was given only if the ship was waiting at the Pilot Station when the port opened, otherwise one would have to wait one’s turn.

When taking over on the 4 – 8 watch, the Extra Second stated that over a half hour period the vessel had achieved 30 knots.  I do recall that we both checked and from midnight to 04:00 hours, the vessel had averaged 28 knots – I know the Agulhas current helped but nevertheless…

I, together with my engineering colleagues, had the more than usual exciting time of reducing the ship’s speed to manoeuvring and navigating to that position determined by the Master for 06:00 hours (port opening time).  I also had to convince the Pilots that we would be at the Pilot Station at the normal time.  When the Pilot came on board, he expressed surprise at our being there, knowing how late we were leaving Durban.  The Master nonchalantly stated that “We are the Mailboat, we are NEVER late!”

The distance from Durban to East London is 260 miles and I believe we dropped the Pilot at about 20:00 hours.

Normal revs 108; we often left Southampton/Cape Town on 110 to get a little time in hand. Other than on this passage the maximum I can remember is 112.  On this particular passage, the engines had reached 119.

I’ve tried to capture the “Good Hope Castle” arriving off the East London pilot station at dawn on that occasion. I’ve used a little “artists licence” in that the Hood point light (four white every 40 sec) is abeam to starboard. In reality, she would have started slowing down long before.

Very special ships. We will never see their like again.