Some things are precious, and among our most priceless possessions are the personal experiences and learning gathered during childhood. Lessons learnt young are retained for a lifetime, and one’s whole character is formed from childhood influences.

This year marks the centenary of the birth of Arthur Ransome, whose children’s novels must be familiar to many of you. Indeed, our Albion alias Sir Garnet has proved to be a minor superstar herself in a BBC version of “Coot Club” and “Big Six”.

Looking back, I am surprised to find just how much of my life has been totally moulded by those kids in Ransome’s books, and I haven’t realised it until the last six months, during which I have re-read the series – almost a second childhood, although many would accuse me of never growing out of the first! I hope you will forgive me for setting down some of my own incidents and experiences, as they were affected by those books.

Some of the books were less enthralling because they were shore-bound, such as “Winter Holiday”, “Pigeon Post” and “Picts and Martyrs”, but some actually reeked of tar and herring. “Peter Duck” for instance:

“The topping lifts had been set up and the booms lifted. Mainsail and foresail… were cast loose ready for hoisting. The staysail… held with a piece of twine that would break at the first pull on the halyards. The jib had been hoisted already, but in stops, rolled up, that is, and tied, so that a pull on the jib sheets would break it out.”

Who could fail to be captivated by the anticipation of it all, and the ingenious bits of seamanship:

“Throw her head off” said John.

“Hoist the staysail and hold him to wind’ard to force her head off the quay”, and later:

sent me running for a book to look up such exciting things like royals and topgallants.

“hooked on the halyard, sheet and down- haul, mousing the hooks with twine so they should not slip open”

“get her into deep water and she’ll ride out anything. It’s shoal water makes the trouble and drowns poor sailormen. We’ll best be putting a reef in her sails, and then if it don’t get no better we can heave her to for the night, and she’ll lie snug as a gull”.

I didn’t know what “heave to” meant. Many years later I remembered this when, as first-voyage merchant navy apprentice, we had to heave to in a hurricane in the Bay of Biscay. Like Peter Duck said – snug as a gull. Fortunately, I was never seasick, otherwise:

There were the mysteries of navigation:

“The black flat-topped buoy on the point was coming quickly nearer. “‘It’s got a red light on the top of it” said Roger.

“But we’re leaving it to starboard” said Roger.

“Because we’re going down the river not up” said John. (We Didn’t Mean To Go To Sea!).” 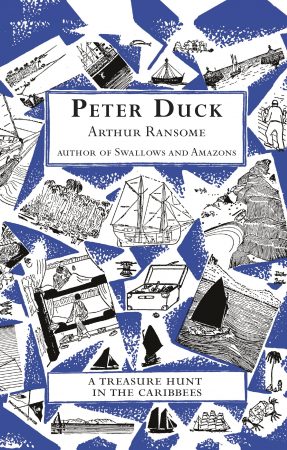 “The moment he had seen the fog closing in. Captain Flint took a bearing of the Longships and another of the Wolf Rock … to plot the position on the chart…  And then something I learned the hard way years later. When making a landfall:

“Sighting land’s nothing. The real work comes after”. 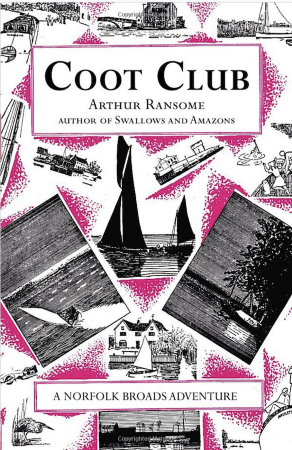 “Slop it in Bridget…When you’ve got a mouthful in, don’t just wave the spoon about. Get it filled while you’re swallowing.”

But, of course, the gems among the novels were the two set on the Broads. Arthur Ransome simultaneously captivated a scene that had gone forever, and foretold with great precision that which was to come. “Big Six” and “Coot Club” are little cameos frozen in time, there for all to enjoy:

“the big black wherry with her gaily painted mast, loading at the old granary by Wroxham bridge, and meant for nothing but hard work…”

“to make the passage through Yarmouth easy even for a little boat by waiting for dead low water before trying to go down through the bridges.”

Also, some pointed advice on wherry handling, some that our erstwhile skippers would do well to heed:

“The one thing on which a wherryman prides himself is making the best use of the tides. There is no sense in sailing against the tide when an hour or two earlier or later you might be sailing with it … bad seamanship is what it seems.”

And underlying all, some good, old-fashioned bits of Norfolk hospitality, accurately portrayed:

“He say he’ll watch the bridge for us and I tell ‘im I’ll punch his head if he don’t.”

Arthur Ransome died in 1967, leaving us a rich legacy of novels. I’m sure he would be pleased to know that they are all still in print, both paperback and hardback, indeed the paperback version of “Swallows and Amazons” has been reprinted nineteen times. I cannot think of a more appropriate end to this piece than to re-quote Commander Ted Walker, R.N. (father of Swallows).

“Grab a chance and you won’t be sorry for a might-have-been”.

Talking of might-have-beens, it’s a pity that the last novel, the third on the “Coots” remains unfinished….