A narrative of the speaker’s experiences working as Navigating Officer in the research vessel RRS “John Biscoe”, in Antarctica during the 1970s. A time when the technology was more akin to that of Shackleton and Scott than to the 21st century. A look at work in Antarctica from the standpoint of operating a ship, with a few of the more humorous episodes. 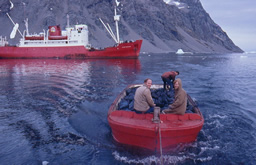 Boatwork landing base supplies at Stonington base 1974

Passenger ships, and cargo ships. A light-hearted look at the colossal changes that have occurred during the last fifty years, with some of the speaker’s own experiences included. Also, the story of a remarkable seaman.

The story of the Blue Riband of the Atlantic and the ships which held this coveted trophy. How technology and national pride influenced sea travel during the 19th and 20th centuries.

THE BATTLE OF THE ATLANTIC Part 1 – Convoys and Corvettes

The story of the struggle during World War 2 to maintain the lifeline of merchant ships supplying Britain. This two-part story is a tribute to the men of the merchant navy who gave their lives manning this lifeline.

The continuing story of the battle against the U-boats, and the ways and means by which they were finally defeated.

STORY OF A DUCHESS

The remarkable story of an otherwise unremarkable passenger liner. Includes the Dr Crippen incident, and the biggest salvage operation ever undertaken in UK waters.

WHEN ARE YOU GOING BACK?

The most frequently-asked question of the merchant seaman on leave. The speaker describes his early years at sea in the 1960s; a world that has disappeared forever. Numerous anecdotes illustrate life in the merchant navy during this period of change.

The story of the liner “Lusitania”. From the triumph of the Blue Riband to the tragedy of her sinking by U-boat, the biggest maritime casualty of the Great War.

The story of the passenger vessel in wartime, including some of the more surprising rôles to which they were put. Passenger ships of all types were vital assets during time of conflict, and this talk describes their many rôles

“If it looks right, it IS right. If it don’t, it’s ugly and probably won’t work”. A look at what it is that makes a ship look attractive or “right”, and how those factors relate to the ship’s function. Some witty insights into the character of the naval architect.

The remarkable story of the mediaeval Swedish warship “Vasa”. The dramatic sinking of the vessel during her maiden voyage in Stockholm harbour, the discovery and raising of the wreck, the restoration of the vessel and the modern museum in which this superb vessel is displayed.

The story of two of the most famous shipping companies in the Merchant Navy; Orient Line, and British India.

The story of the White Star Line from it’s inception to the building and sailing of the “Titanic” in April 1912.

The dramatic story of the rescue operation by the “Carpathia”, and the aftermath of the disaster.

A short description of the many and varied high-tech vessels engaged in offshore operations in the 21st century. This talk provides an insight to a vital marine industry that is largely out-of-sight.

A narrative of the speaker’s experiences in the restoration, preservation and operation of an important historical sailing craft. Many personal anecdotes from the days before “health and safety” ruled supreme.

The remarkable story of Captain Sir James Bisset, who started his career at sea as apprentice in sailing ships and eventually became Commodore of the Cunard Line.

Three short stories of individual epics of the sea, with a common theme of completing the voyage against all odds.

The epic story of the vitally important convoys to Malta in 1942, and the battles to get the ships and cargo through

Heroism at sea. The story of the liner “Jervis Bay” and the tanker “San Demetrio”

The story of the massive programme during World War 2, for the construction of cargo ships to replace those lost to the U-Boat offensive.

In addition to the above, a number of short “filler” items are available as required.